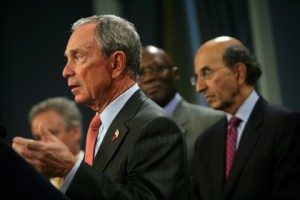 In the world according to Bloomberg, he wants to ban the sale of 16-ounce size sugary beverages in New York City in an effort to reduce obesity.

In a dramatic move to reduce obesity, the city is going to become the first in the nation to impose a 16-ounce limit on the size of sweetened beverages sold in food establishments that receive letter grades from the Health Department, as well as mobile food carts.

The list includes more than 20,000 restaurants, as well as movie theaters, stadiums and arenas.

The ban would apply to fountain drinks and bottled sodas and could go into effect March 2013.