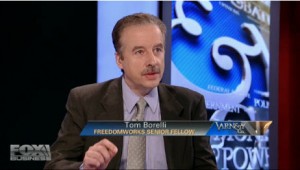 Becket Adams’ story from TheBlaze.com talks about the bankruptcy of one of America’s largest thermal coal producers, Patriot Coal.

“The coal industry‘s going to go bankrupt because of President Obama’s boot against their throat.”

Read the entire story at TheBlaze.com.