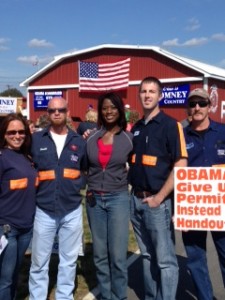 Tom and I were keynote speakers and rallied with coal miners, their families and other supporters for the coal industry in Lawrence County, Ohio.

President Obama has a war against coal which is a war against hard working Americans and Ohio will be an important state to determine the outcome of the presidential election.

We garnered the following news coverage about the event:  Ironton Tribune, The Herald Dispatch, and WCHS-TV8 Eyewitness Local News.