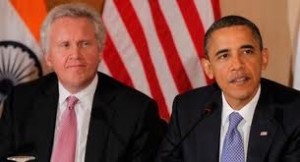 GE CEO Jeff Immelt is calling on President Obama and his Congressional adversaries to meet in order to keep the $1.2 billion in spending cuts from taking effect on March 1.

Immelt, former chairman of Obama’s Council on Jobs and Competitiveness, is the last person to have a say in this matter, considering the millions in stimulus tax dollars GE obtained for renewable energy and the recent looting of tax payer funds in the fiscal cliff deal.