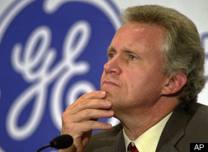 Denning dissected the truth from the chief executive’s spin from the comments Immelt made at Manufacturing’s Next Chapter, a meeting sponsored by The Atlantic.

Most enjoyable was Denning’s accurate characteristic of Immelt’s tenure as CEO:

“Mr. Immelt is the exemplary Teflon-coated executive, equally comfortable in corporate boardrooms and the corridors of Congress. In his twelve years as GE’s CEO, while he has presided over a 40 percent decline in GE’s shareholder value, thus defying all known laws of financial gravity, Mr. Immelt not only still holds his job: he has even been repeatedly named as one of the best chief executives in the world.”

It’s outrageous that the board of directors has allowed Immelt to remain as the CEO and that the business establishment hails such a failed leader.