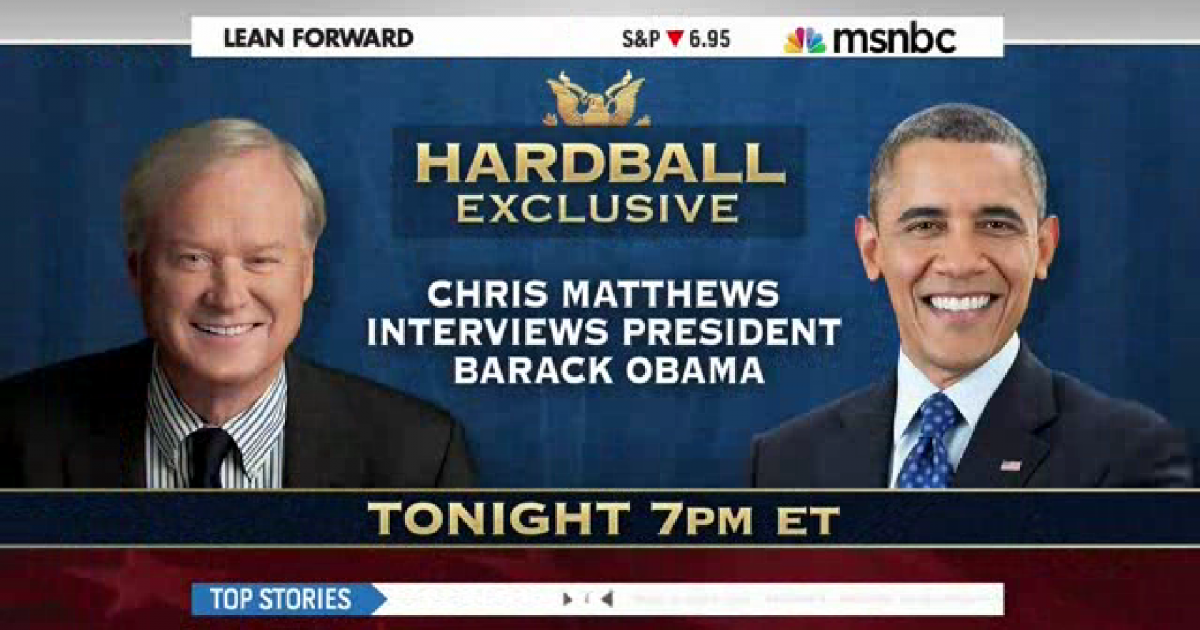 The left-wing media establishment is in full defend Obama mode.

With sinking poll numbers, especially in key demographic groups such as Hispanics and young voters, team Obama is desperate to generate any positive media traction to stop him from slipping into the political abyss.

Looking to change the trajectory of his presidency, Obama is going on the offensive to promote the advantages of ObamaCare.

Given that backdrop, it’s not surprising to see that Obama wanted to be interviewed by MSNBC’s Chris Matthews.

Matthews adores Obama and he has aggressively used his program, Hardball, to defend the president including frequently using the race card. Read more here

Friendly turf is what Obama needed and that’s what he got by going on MSNBC.

The coordination between Comcast-run MSNBC is truly alarming. While an objective and aggressive media is crucial for keeping the government in check, a submissive press threatens our liberty.

Matthews’ interview was clearly an easy one for Obama.

On FoxNews.com, media critic Howard Kurtz characterized the interview not as a softball but as “wiffle ball.”

Everyone knew going in that the MSNBC host would be a sympathetic interviewer. But he knew he would be graded on his aggressiveness, so I expected at least a few fastballs. Uh uh.

Instead, in a half-hour sitdown, there was one challenging question. Just one.
It was as though Matthews was channeling Jay Carney.

Matthews is a likable guy with a passion for politics, but he left his interviewing chops at the door. The mile-a-minute man who jumps all over his guests let the president ramble on with long, discursive, three-part answers. At times Matthews acted like a political science professor. Maybe he was getting a reprise of the famous thrill up the leg.

This was clearly a home game for Obama.

The “wiffle ball” interview was only the first step with NBC’s effort to rehabilitate the president.

Step two included a news story on Obama’s interview that was posted on the NBC Politics website which was also posted on The Grio – MSNBC’s website for blacks.

The story, “President Obama: GOP should be ‘embarrassed’ by low productivity in Washington,”
solely focused on Obama’s comment that slammed Republicans.

In an interview with MSNBC’s Chris Matthews, the president said Republicans shouldered most of the blame for gridlock in Washington, especially as GOP lawmakers tend to the ideological concerns of their party’s conservative flank.

“They’ve got to be embarrassed,” the president said on a special edition of “Hardball” that aired Thursday evening. “Because the truth of the matter is they’ve now been in charge of the House of Representatives – one branch or one chamber in one branch of government – for a couple of years now. They just don’t have a lot to show for it.”

This is a classic example illustrating how Comcast and its NBC media unit worked to rescue Obama with a special emphasis on brainwashing black Americans.

To protect our liberty we must break the Comcast alliance with Obama. That’s why FreedomWorks initiated the www.StopComcast.com campaign where you can sign up and help make a difference.