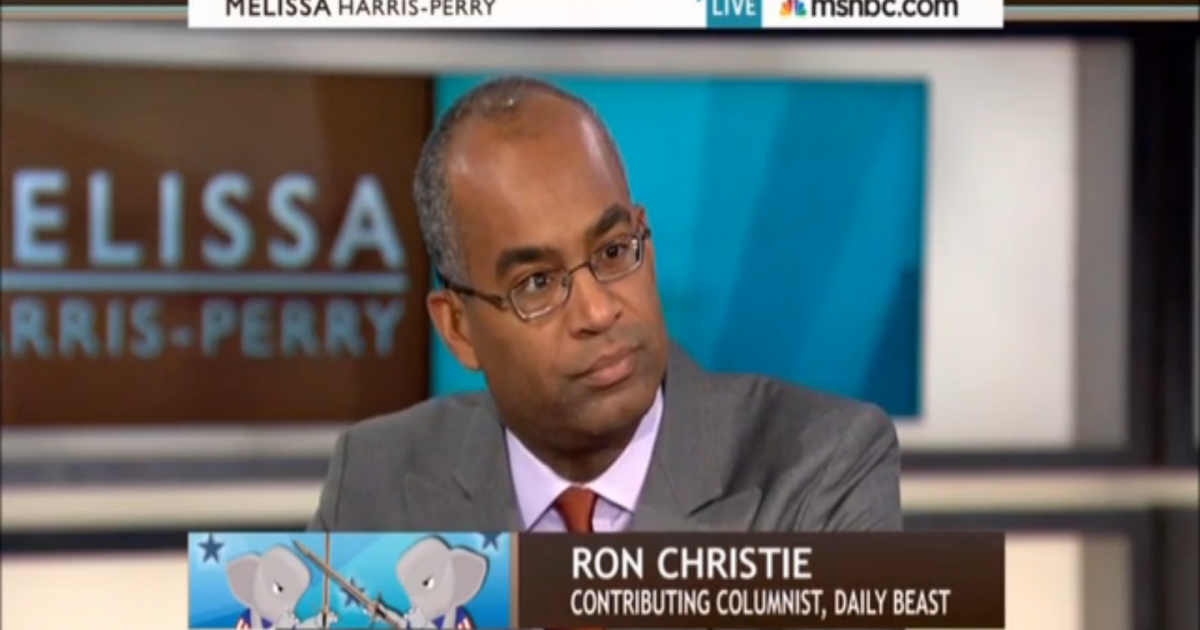 For far too long, MSNBC hosts and guests have used the race card to unfairly attack the character of Tea Party activists as a means to undermine their credibility.

Surrounded by liberals, Christie promptly reacted to the old and wild accusation made by Angela Rye, a former executive director of the Congressional Black Caucus (CBC), that Tea Party activists oppose Obama because of race. Being on MSNBC, Rye must have thought she was in a liberal safe zone where any statement goes without a challenge.

In the past, Rye has used the race card as an excuse to defend President Obama from his failed policies. While at the CBC she said:

“I think that a lot of what the president has experienced is because he’s black. You know, whether it’s questioning his intellect or whether or not he’s Ivy League. It’s always either he’s not educated enough or he’s too educated; or he’s too black or he’s not black enough; he’s too Christian or not Christian enough. There are all these things where he has to walk this very fine line to even be successful.”

Noel Sheppard’s post at NewsBusters, “Ron Christie to MSNBC Guest Claiming Tea Party Is ‘Racial’: ‘I Will Not Sit Here and Allow You to Say That,’” described the exchange.

During a lengthy political discussion with Christie as the lone conservative against four extreme liberals (including the host, of course), Rye said, “I was just thinking, to me, in 2010, the Republican infighting took a particularly dangerous tone because it wasn’t just about infighting anymore. It was about taking our country back with the resurrection of the Tea Party. And it was very, very racial, whether any of them will admit it or not.”

Christie quickly refuted this saying, “Racial! I will not sit here and allow you to say that!”
“I said it, and I’ll say it again,” Rye responded.

“The Tea Party came in, there were 63 people who came in in 2010 because the government grew too much,” replied Christie as he wagged his finger at Rye.
“That’s fine,” she said. “You should calm down just a little bit.”

“No, no, no,” Christie shot back. “I will not allow people to sit here and say there was a racial aspect to it. That’s absolutely false!”

At that point, the host cut in for a commercial break before saying, “This is absolutely valuable, and I’m not going to let it die over the course of the commercial.”

Christie did not stop there. He followed up by writing about the incident in a commentary, “Democrats Have Maxed Out the Race Card,” in The Daily Beast where he also accurately described the rise of the Tea Party.

Nye (sic) is correct about one thing. The rise of the Tea Party in 2010 was about taking our country back. Not back from the country’s first elected African-American president but back from an arrogant, out-of-touch group of Washington, D.C., politicians who repeatedly ignored their constituents’ warnings about the massive expansion of federal government spending. Despite widespread opposition to the whimsically named Patient Protection and Affordable Care Act, Democrats rammed the bill through both chambers of Congress without a single Republican vote.

Left-wing activists will continue to spread lies about conservative activists until individuals call them out to expose their lies.

Christie had the facts on his side and he did not hesitate to act to defend the truth.

Hopefully, conservatives will follow Christie’s lead and stomp out the race card every time it is raised.