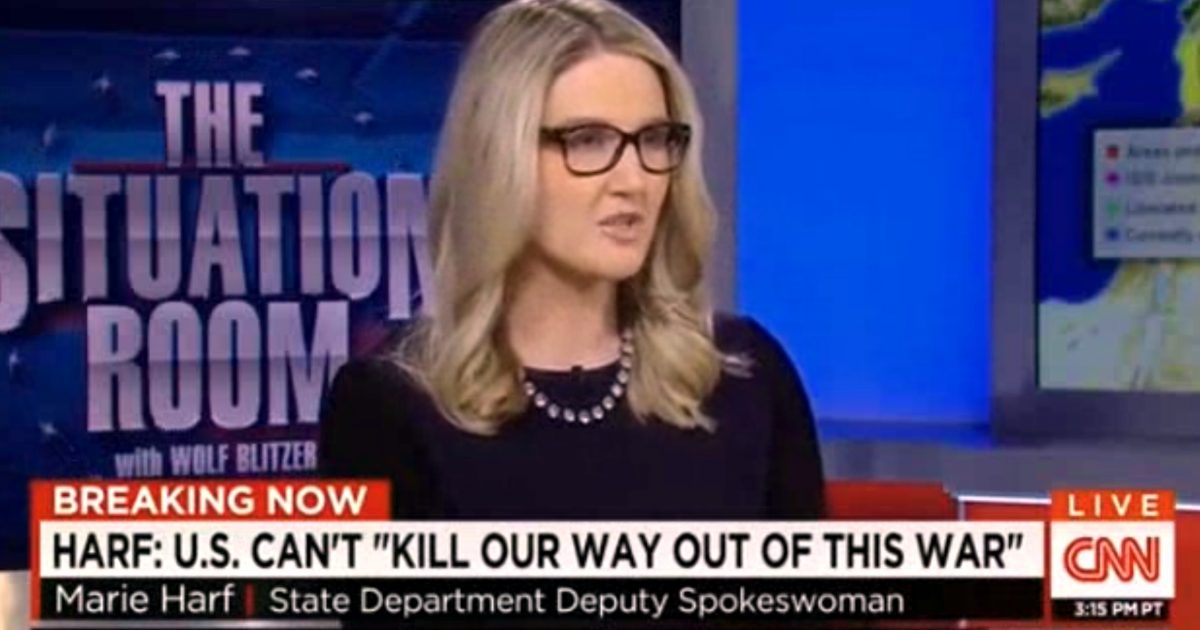 Marie Harf, the deputy spokesperson for the United States Department of State, is now the face of the Obama foreign policy in dealing with Islamic terrorists. Said Ms. Harf to MSNBC’s Chris Matthews as reported by Fox News:

“We’re killing a lot of them, and we’re going to keep killing more of them. … But we cannot win this war by killing them,” department spokeswoman Marie Harf said on MSNBC’s “Hardball.” “We need … to go after the root causes that leads people to join these groups, whether it’s lack of opportunity for jobs, whether –” “…If we can help countries work at the root causes of this — what makes these 17-year-old kids pick up an AK-47 instead of trying to start a business?”

Got that? All this endless beheading and murder is about a lack of jobs.

Harf was immediately the subject of mockery. Then the kid from Granville, Ohio – in the best style of her badly learned East Coast snobbery that is always the telltale sign of insecurity – went snooty. “We cannot kill every terrorist around the world, nor should we try. How do you get at the root causes of this? It might be too nuanced an argument for some, like I’ve seen over the last 24 hours [in] some of the commentary out there, but it’s really the smart way that Democrats, Republicans, our partners in the Arab world think we need to combat it.”

Ah yes. Marie Harf doubles down on one network show after another. It’s all about the nuances and we peasants out here just aren’t smart enough to understand.

But let’s take her seriously – because in fact at this point it’s more than safe to assume that what Harf said was not some whimsical thought of her own but rather one of the core beliefs of her superiors in the State Department and the Obama White House. In fact, as seen in this Voice of America interview, Undersecretary of State Richard Stengel made the very same argument back in November of last year, with Stengel – a former Time magazine editor – saying: “There are structural problems in the Middle East and the Arab world that can sometimes make Daesh’s attractive, attractive to young men who don’t have jobs, who don’t see a great future for themselves…” So, with that in mind?

Was Harf – who has a Bachelor’s in Political Science from Indiana University (with concentrations in Jewish Studies and Russian and Eastern European Studies) and a Masters in Foreign Affairs from the University of Virginia – skipping class when the subject of jobs in Nazi Germany was discussed? Assuming it was ever discussed? Well just in case let’s go back in time and take a look.