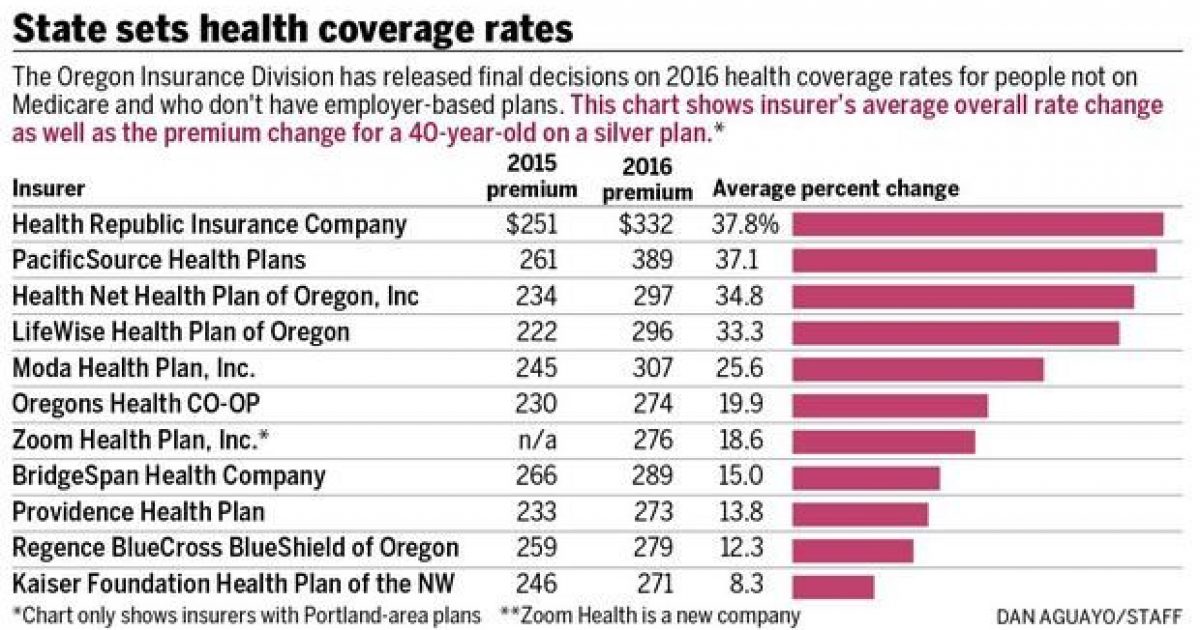 The short answer is a lot.

Oregon just released the 2016 premium rates that impacts over 220,000 residents that obtain their healthcare coverage through the state exchange.

The cost for insurance for more than half of the health plans offered will be 20 percent and higher with the biggest increase coming in at almost 38 percent.

More than 220,000 Oregonians who buy their own health insurance will face higher premiums next year, and Portlanders could see some of the biggest hikes in the country.

Oregon is the first state to announce 2016 rates for people who aren’t covered by their employers or government programs. Overall, the news is not good for consumers.

Some insurers had asked the state to approve rates similar to last year’s lowest. But many insurers lost money from unexpectedly high costs, so officials proposed raising many rates in preliminary decisions two weeks ago. The final decisions issued Wednesday resulted in a slightly better range of options for consumer.

Still, the least expensive “silver” plan premium available to a 40-year-old next year will run $271 per month under the new rates. That’s up $49 per month over this year’s low rate. Bronze plans offer the least coverage under new federal ratings, and platinum the most.

The rates were approved because, according to the state insurance commissioner, the costs of providing health services exceeded the amount of money the companies received in premiums. For example, in 2014 the cost for providing healthcare was $830 but only $703 were collected in premiums.

Oregon is not the only state that will boost the cost for healthcare coverage.

Health insurance companies around the country are seeking rate increases of 20 percent to 40 percent or more, saying their new customers under the Affordable Care Act turned out to be sicker than expected. Federal officials say they are determined to see that the requests are scaled back.

Blue Cross and Blue Shield plans — market leaders in many states — are seeking rate increases that average 23 percent in Illinois, 25 percent in North Carolina, 31 percent in Oklahoma, 36 percent in Tennessee and 54 percent in Minnesota, according to documents posted online by the federal government and state insurance commissioners and interviews with insurance executives.