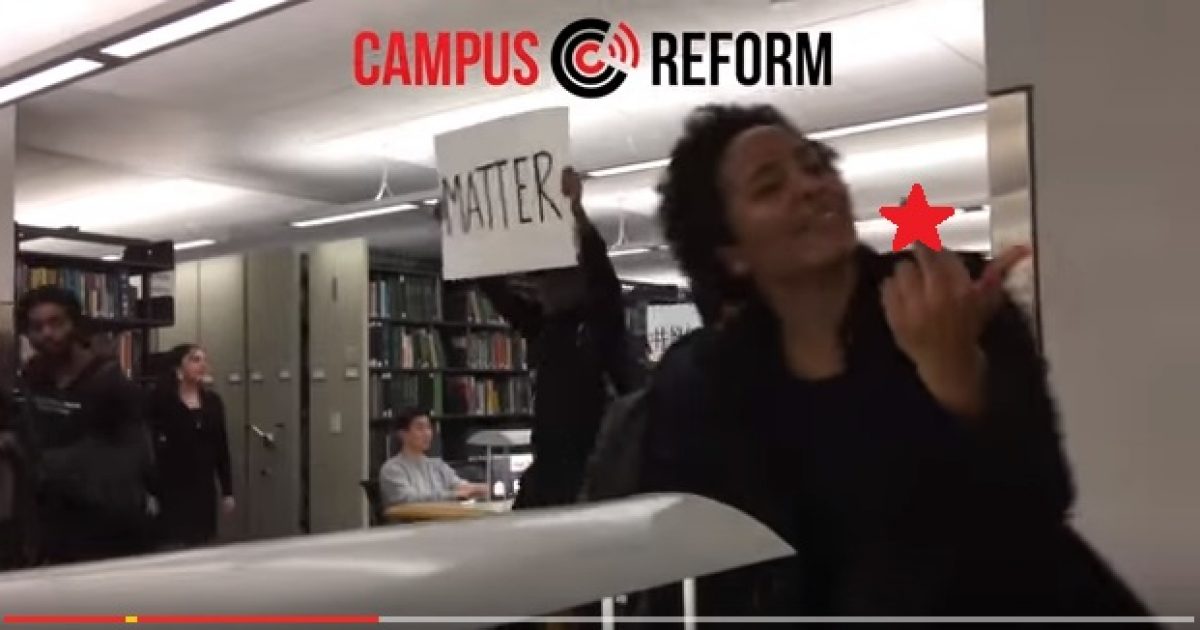 A Dartmouth Black Lives Matter protest crossed the line into verbal and reported physical abuse in the university’s library, exposing the movement for what it really is: an angry, violent, and entitled mob.

Protesters at Dartmouth University disrupted students studying in the library, reportedly directing profanity towards white students and physically pushing others. In a critical editorial, the conservative Dartmouth Review listed some of the epithets hurled by the protesters: “Fuck you, you filthy white fucks!” “Fuck you and your comfort!” “Fuck you, you racist shits!”

In addition, the Review reports that some of protesters became physically violent: “Men and women alike were pushed and shoved by the group. ‘If we can’t have it, shut it down!’ they cried. Another woman was pinned to a wall by protesters who unleashed their insults, shouting ‘filthy white bitch!’ in her face.”

These shouted epithets were the first indication that many students had of the coming storm. The sign-wielding, obscenity-shouting protesters proceeded through the usually quiet backwaters of the library. They surged first through first-floor Berry, then up the stairs to the normally undisturbed floors of the building, before coming back down to the ground floor of Novack.

Throngs of protesters converged around fellow students who had not joined in their long march. They confronted students who bore “symbols of oppression”: “gangster hats” and Beats-brand headphones. The flood of demonstrators self-consciously overstepped every boundary, opening the doors of study spaces with students reviewing for exams. Those who tried to close their doors were harassed further. One student abandoned the study room and ran out of the library. The protesters followed her out of the library, shouting obscenities the whole way.

Students who refused to listen to or join their outbursts were shouted down. “Stand the f*** up!” “You filthy racist white piece of s***!” Men and women alike were pushed and shoved by the group. “If we can’t have it, shut it down!” they cried. Another woman was pinned to a wall by protesters who unleashed their insults, shouting “filthy white b****!” in her face.

Even members of the campus movement are slowly backing away from Black Lives Matter. One Dartmouth student formerly sympathetic to the cause wrote an oped in the school’s newspaper called, “I was proud to be part of last night’s protest – until it turned ugly.”

Not surprisingly, the DNC and the black liberal establishment are radio silent on this issue. The DNC formally endorsed the Black Lives Matter movement last September…. do they endorse the pushing, shoving, and intimidation that took place in the Dartmouth library as well? Why aren’t the Reverends Al Sharpton and Jesse Jackson out preaching about non-violent resistance, and what it means to lead by example?

The black liberal establishment has nothing to say right now, because they are to blame. They have worked for years to create an environment of racial tension where low income and minority Americans feel victimized. They have manipulated the anger of minority voters to elect Democrats who advance policies that put those same voters deeper and deeper into cycles of debt and dependence.

To the black liberal establishment, black lives don’t matter as much as black votes.