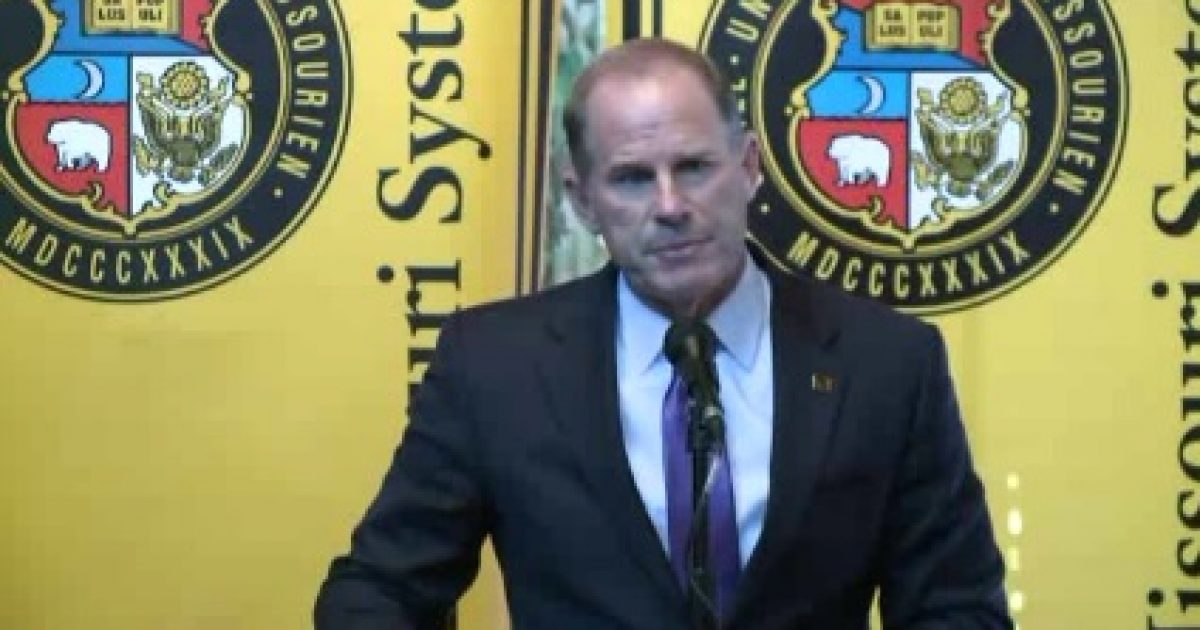 Amid boycotts, protests, hunger strikes and racial tensions on the University of Missouri campus, the University’s president Tim Wolfe has announced his resignation.

The University of Missouri’s president said on Monday he would resign after protests over his handling of racial tensions on campus rocked the school. The university’s black football players had refused to practice or play until President Tim Wolfe stepped down, and some teachers and students had threatened to walk out of class.

The football team suspended practice on Saturday and Sunday, and more than 30 black players had vowed not to return until Wolfe was fired or resigned. In addition to the football team’s action, one student has held a weeklong hunger strike. Protests on campus have been led by a group called ConcernedStudent1950, which says black students have endured racial slurs and believes white students benefit from favoritism in many aspects of campus life.

The protesters have been aggressively harassing the president, in one case surrounding his car at a homecoming parade. More protesters cornered Wolfe in a video posted on Twitter:

The football team joined the boycott and protest efforts on the morning of Sunday, November 8:

The Mizzou Family stands as one. We are united. We are behind our players. #ConcernedStudent1950 GP pic.twitter.com/fMHbPPTTKl

Obviously, racism is unacceptable, and should not be tolerated anywhere. However, it should also be recognized that steps were being taken on the campus to address the protester’s concerns. Wolfe met with protesters several times, and a diversity program was approved over the summer and expected to be rolled out early next year. The protester’s expectations for change were exceeding reality. Change was happening- it’s just that results weren’t being seen overnight.

In a campus of over 30,000 students, there will be instances of ignorance and intolerance. They should be condemned. But we as a society shouldn’t let a few knuckleheads represent the entire student population. They don’t deserve to have that kind of power, so we shouldn’t give it to them by causing an entire campus uproar.

This isn’t the first conflict on campus. As Fox News points out:

The racial issues are just the latest controversy at the university in recent months, following the suspension of graduate students’ health care subsidies and an end to university contracts with a Planned Parenthood clinic that performs abortions.

One has to wonder if this entire ConcernedStudent1950 movement is really about the University, or is this about advancing the progressive agenda on campus and driving black voters to the polls for Hillary Clinton?