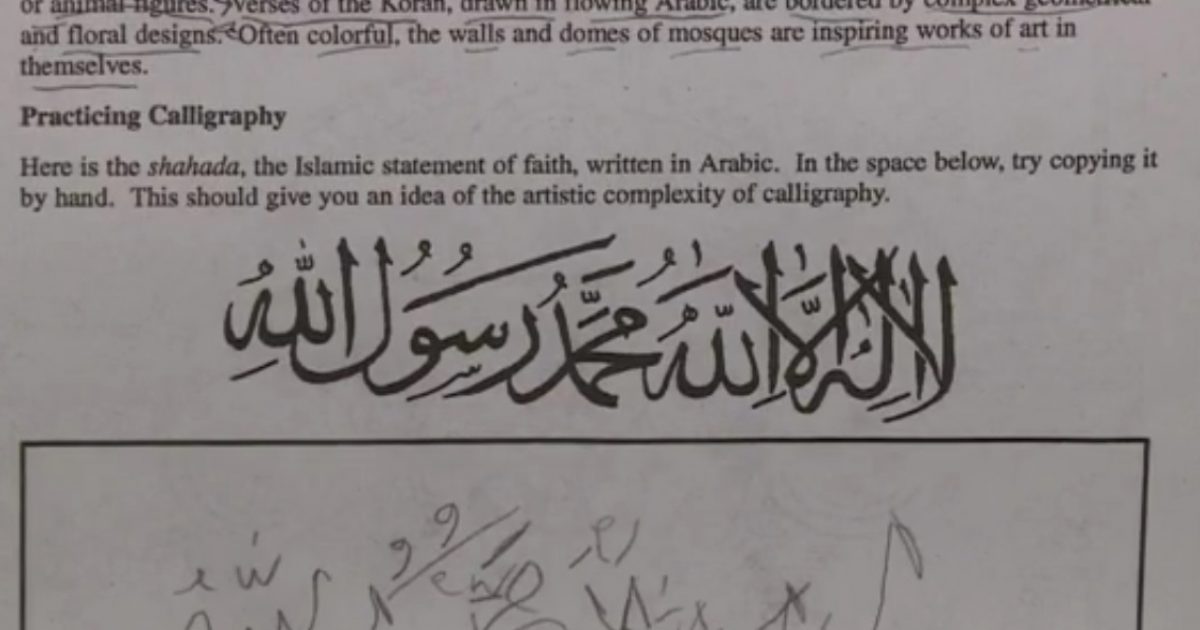 Amazing how separation of church and state only seems relevant to liberals and the ACLU if Jesus is involved. Prayers for safety during a football game or thanking God for the successful completion of high school has become blatantly offensive in the world of political correctness, while other “religious” exercises in public schools go largely unnoticed.

Recently, “There is no god but Allah” was the assignment for Virginia students taking calligraphy at Riverheads High School.

A Virginia school district is defending a classroom assignment that required students to practice calligraphy by writing the Muslim statement of faith, “There is no god but Allah. Muhammad is the messenger of Allah.”

“Neither these lessons, nor any other lesson in the world geography course, are an attempt at indoctrination to Islam or any other religion, or a request for students to renounce their own faith or profess any belief,” the district said in a statement provided to Fox News.

Parents told The Schilling Show that their children were not given the translation of what they were writing.

In other words, there were more than likely a few Christian teenagers in that room who had no idea they were writing, “There is no god but Allah.”

But the school district doesn’t seem to think that’s a problem.

“The statement presented as an example of the calligraphy was not translated for students, nor were students asked to translate it, recite it or otherwise adopt or pronounce it as a personal belief,” the district stated.

They said it was all about the art — not about the theology.

“They were simply asked to attempt to artistically render written Arabic in order to understand its artistic complexity,” they stated.

And out of sheer coincidence — out of all the Arabic words and phrases the teacher could have selected, she picked the Islamic statement of faith?

And what about having the female students dressing up in Islamic garb — is that consistent with the state mandates, too?

The district said the students were taught about the “modest dress adopted by many in the Islamic faith and were invited to try on a scarf as a part of an interactive lesson about the Islamic concept of modest dress.”

“The scarf used in the activity was not an actual Islamic religious hijab,” the district stated.

The district said they also cover other religions — including  Christianity, Buddhism, Judaism and Hinduism.

However, one parent told The Schilling Show that while the Koran was presented to students, the Bible was not. The teacher reportedly declined to provide a Bible because all the students have either read or seen a Bible.

Because baby Jesus in a manger is so much more threatening than the Islamic State right now. Whoops. My political incorrectness is showing…