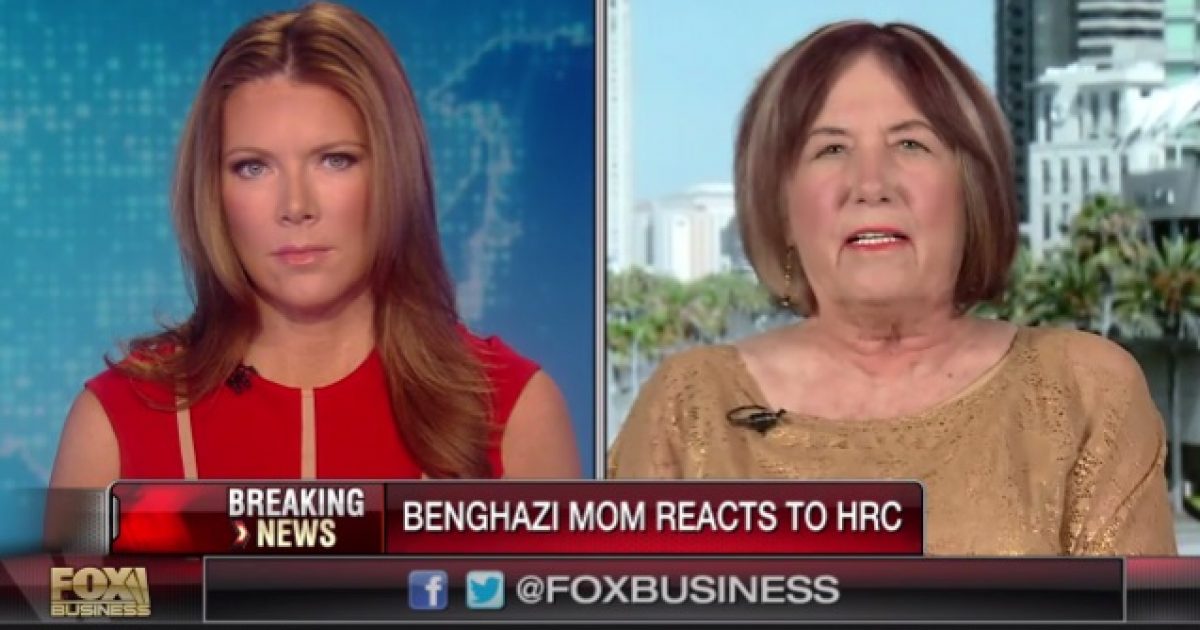 Hillary Clinton had some harsh words for the mother of a Benghazi victim during her CNN debate, implying that the mother was being dishonest in her comments to the press.

“She’s wrong, she’s absolutely wrong,” Clinton replied. “I and everybody in the administration, all the people she named, the president, the vice-president, Susan Rice, we were scrambling to get information that was changing literally by the hour. And when we had information, we made it public but then sometimes we had to go back and say we have new information that contradicts it.”

Patricia Smith heard Hillary’ comments loud and clear, and has zero tolerance for the former Secretary of State’s excuses and lies.

Patricia Smith, whose son Sean was killed in the 2012 terrorist attack on the US consulate in Benghazi, Libya, responded to Democratic presidential candidate former Secretary of State Hillary Clinton’s statement about her being “absolutely wrong” by saying there’s “a special place in hell” for people like Clinton “and I hope she enjoys it there” on Thursday’s broadcast of the Fox Business Network’s “Intelligence Report with Trish Regan.”

Smith said, “She lied to me. She told me it was a fault of the video. … And she knew full well it wasn’t at that time. And then she says, she was going to check, and if it’s any different, she would call me back. She would let me know. She has never once spoken to me, or her office. The only thing I ever got out of them is that I am not a member of the immediate family, and I don’t need to know.”

She later added, “I want Hillary to talk to me personally, and tell me why there was no security there, when they were asked for it. I know this, because I spoke to my son. That day, he says he was really scared, because he saw the 17 people — 17 November, whatever it was, that they were walking around taking pictures. And he was afraid. He says it didn’t look very good. And he was afraid. And that he asked for security, and he was turned down.”

When asked about criticisms that the matter had been politicized, Smith stated,”All I want is for Hillary to tell me what happened. What’s political about that? I think that as a mother, I deserve to know. And as a woman, as she says, she always talks about a woman, I am a woman too. I think I deserve to know why my son is dead.”

It’s unfortunate that this grieving mother had to rely on the media to dig for the truth about the circumstances surrounding her son’s death. Hillary’s State Department should have been open and honest throughout the entire crisis from the first moment. Instead, they were more concerned with controlling the PR and political fallout from their mistakes.  That’s not leadership.