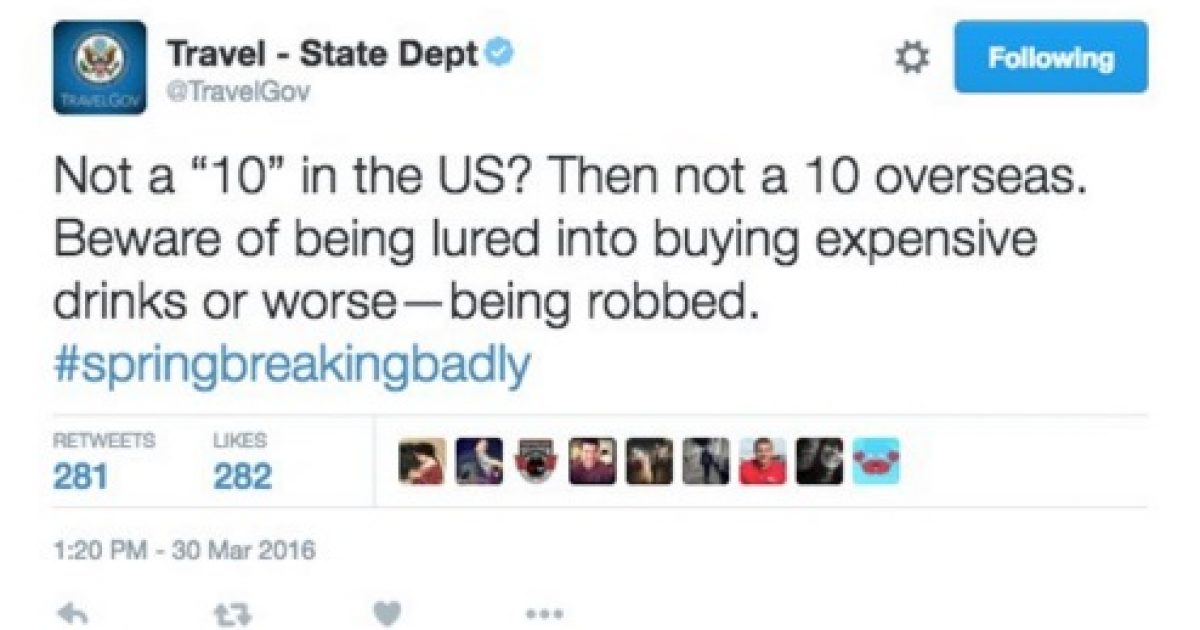 Sometimes it’s a struggle to break through all the noise of social media, especially if you have to discuss something boring but important, like government travel tips.

The State Department attempted to get the attention of spring breakers with a humorous campaign about hypothetical “spring break fails.” As it turns out, the department’s tweets were the biggest fail of all.

The State Department’s Bureau of Consular Affairs was forced to apologize Wednesday after a tweet that appeared to offer overseas travel advice specifically for ugly Americans. For the past several days, the bureau’s Twitter account has posted messages offering practical, straightforward travel advice for American students heading overseas, using the hashtag “springbreakingbadly.”

… Wednesday, however, the official counsel took a very personal turn. “Not a ‘10’ in the US? Then not a 10 overseas. Beware of being lured into buying expensive drinks or worse – being robbed,” the controversial tweet said. While the message was meant to warn of potential scams initiated by personal compliments and/or alcohol, most social media users reacted with sarcasm or anger.

#springbreakingbadly really blowing up, thanks to @TravelGov's "tips" and this one in particular (now deleted): pic.twitter.com/uNNAfqrFdL

Too far? Probably. The government should be held to a higher standard of behavior than the usual hoi polloi on Twitter.

But the response from a parody account took the cake:

The State Department had to apologize, but at least they got what they wanted: Americans are reading their Twitter timeline….