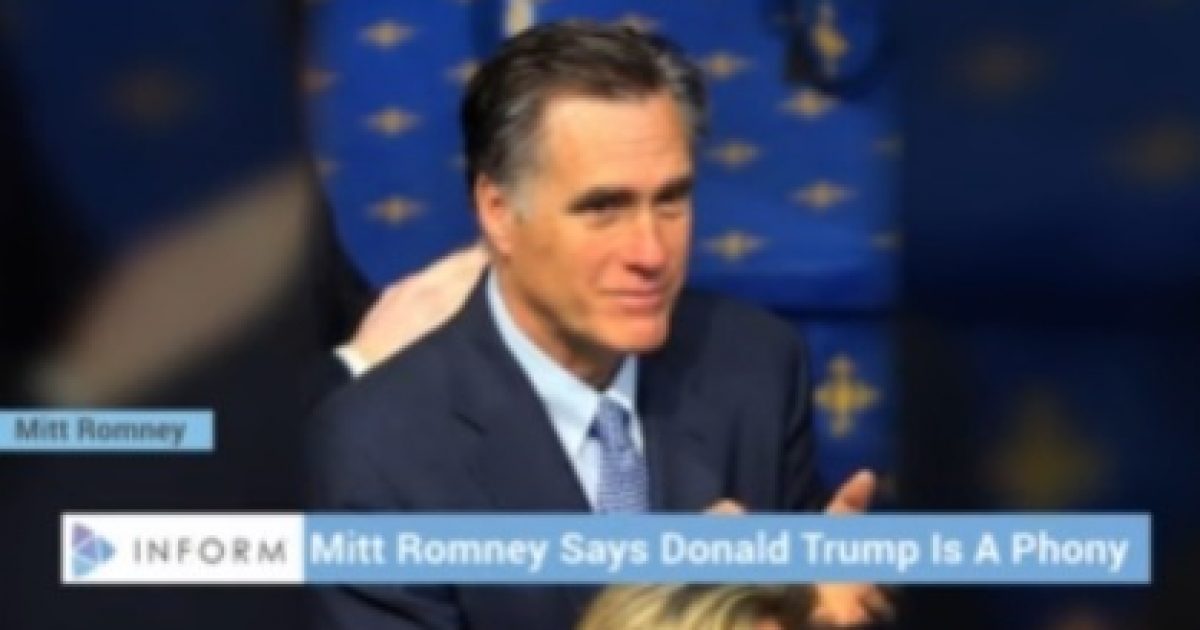 Former GOP presidential nominee Mitt Romney is giving a speech at 11:30am this morning, and Fox News has the early scoop on what he’s about to say. Spoiler alert: It’s not exactly a glowing endorsement of Donald Trump:

Mitt Romney plans to launch a broadside against Donald Trump’s surging campaign on Thursday, calling the man who wishes to succeed him as the GOP’s presidential nominee a “phony” and a “fraud” who is playing Americans for “suckers.”

The 2016 front-runner already is firing back, calling Romney a “failed candidate” who begged him for his endorsement when he ran four years ago. Trump indeed endorsed Romney in the 2012 race. Romney plans to deliver his speech at 11:30 a.m. ET at the University of Utah. In prepared remarks, the party’s 2012 presidential nominee issued a stark warning that Trump’s policies would lead to recession and “make America and the world less safe.”

He says the “only serious policy proposals” for the country are coming from the other Republican candidates on the field. “I understand the anger Americans feel today,” Romney plans to say, but adds: “Here’s what I know. Donald Trump is a phony, a fraud. His promises are as worthless as a degree from Trump University. He’s playing the American public for suckers: He gets a free ride to the White House and all we get is a lousy hat.” Romney also claims Trump, if nominated, would enable Hillary Clinton to be elected president.

Looks like two-time failed candidate Mitt Romney is going to be telling Republicans how to get elected. Not a good messenger!

Failed candidate Mitt Romney,who ran one of the worst races in presidential history,is working with the establishment to bury a big "R" win!

I am the only one who can beat Hillary Clinton. I am not a Mitt Romney, who doesn't know how to win. Hillary wants no part of "Trump"

Why did Mitt Romney BEG me for my endorsement four years ago?

Romney’s speech hasn’t even started yet, but it looks like he already struck a nerve.

Would Mitt Romney’s opinion change your mind about Donald Trump either way? Let us know in the comments!