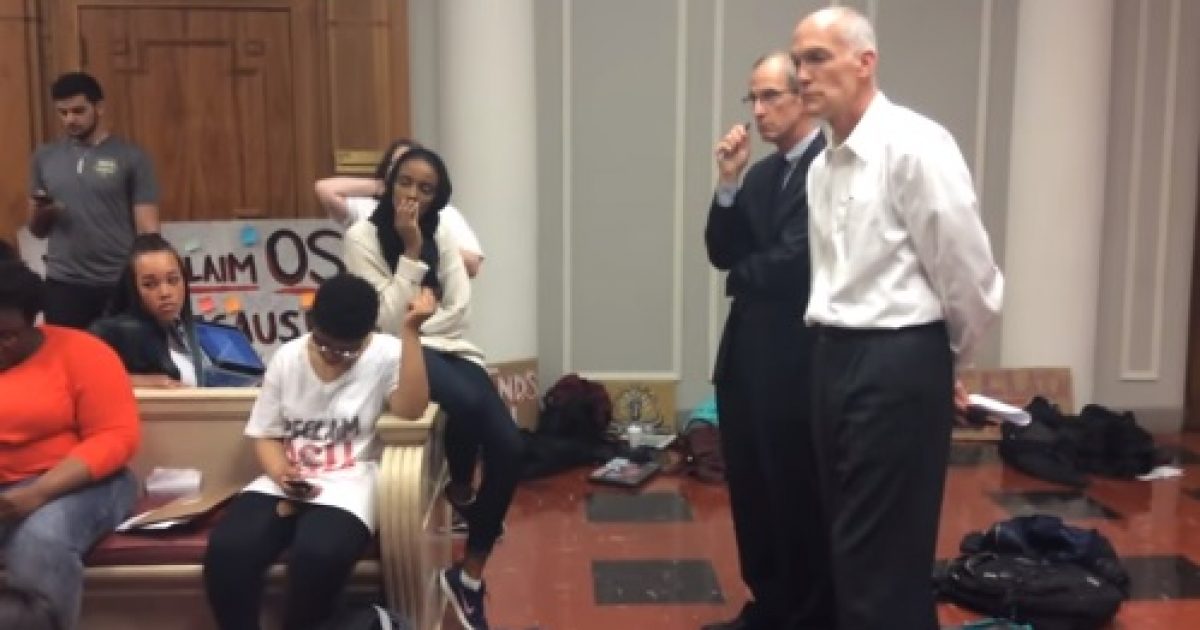 The National Review transcribed the video below:

Ohio State Vice President Jay Kasey paid the protesters a visit shortly after the occupation began, with a message from the president. “Dr. Drake will never receive a list of demands and he will not negotiate with you,” Kasey calmly informed the group before moving on to the next part of his conversation, which included the university’s own list of demands.

This is where it gets good: “If you refuse to leave, then you will be charged with a student code of conduct violation,” Kasey said. “If you are here at 5:00 a.m. we will clear the building and you will be arrested.” He added, “We will give you the opportunity to go to jail for your beliefs.”

“What do you mean by ‘clear the building?’” one of the stunned students asked. Kasey didn’t mince words: “Our police officers will physically pick you up and take you to a paddy wagon,” he answered.

“The people who work in this building should be protected also.” He then explained to the incredulous protesters that they’d “scared” several of the employees and that university employees had the right to work without disruption and intimidation.

The protesters objected (but one asked for the names of specific, complaining workers) to no avail: Kasey had little patience for it. “We told you, and all we can do is be honest with you. If you’re still here at 5:00, our current philosophy is, we are going to take you out — escort you out of the building and arrest you. You will be discharged from school also,” he noted. Confused, one of the students asked, “discharged as in…?” “Expelled,” Kasey answered flatly.

As to be expected, the protesters cleared out by 12:30am and declined to be arrested for their “cause.”

To paraphrase Everett Piper, president of Oklahoma Wesleyan University: this is not a daycare.

Bravo to Mr. Kasey for reminding students that they have the right to free speech, but they do not have the right to trespass, intimidate campus employees, and interrupt the education of other students. There are rules for a reason, and it’s refreshing to see that Ohio State actually has the backbone to enforce them.