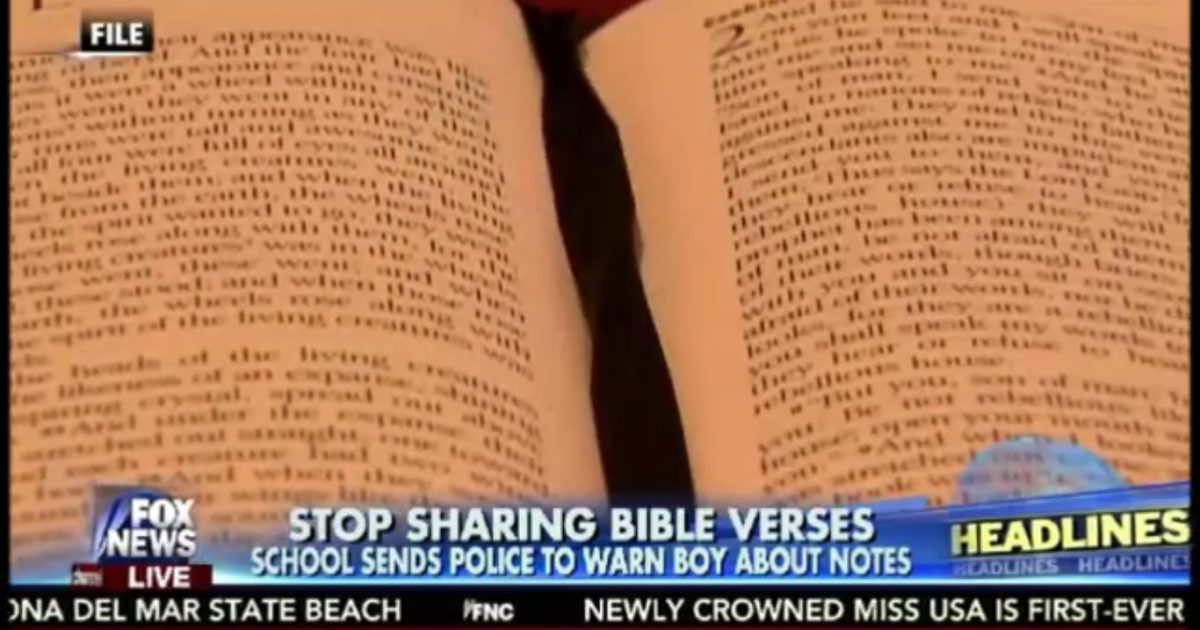 It started out innocently enough. Christina Zavala, a mom in California, has been including a Bible verse in the lunch her 7 year old son takes with him to school every day. After school, the student would share his mother’s notes and verses with his friends outside on the sidewalk.

He also shared other verses and short Bible stories among his friends, until a first-grade teacher saw one of those notes. The teacher reportedly publicly rebuked the boy, and then called his parents, warning them that such actions go against the separation of church and state.

The boy, however, allegedly continued to distribute Bible verses out at the school gate, and subsequently he and his parents were told by the school’s principal that what they were doing is not permitted.

Later that day, a Los Angeles deputy sheriff went to the family’s home to inform the parents that Desert Rose Elementary School had filed a report against the child for sharing Bible verses.

The Liberty Counsel, a nonprofit organization specializing in religious freedom cases, sent a letter to the School District stating,

“It was improper to ban student religious discussion during lunchtime. The district cannot suppress and censor this discussion, or the one-page notes consisting of Bible stories and verses placed by C’s mother in C ‘s lunch for his own personal enjoyment and edification; which he voluntarily chose to share with his little friends during non-instructional time; which interested classmates were free to accept or refuse, at their own discretion,” the letter stated.

“The additional copies requested by C from his mother, for his friends (who had specifically requested them from him), are likewise protected, and fall into no classification of material that might be lawfully prohibited by the school district,” it added.

“The consigning of C’s speech to the ‘schoolhouse gate,’ and then the prohibition of it even there, is unconstitutional, and must fall. Finally, if being censured for religious expression by one’s First Grade teacher in front of one’s classmates is not intimidating and humiliating enough, the message of hostility to a child’s religious expression is underscored by the District calling law enforcement for a ‘follow-up visit ‘ to his house.”

The phrase “separation of church and state” has become nothing more than a permission slip to suppress Christian thought and expression by American students and teachers – something our founders neither intended nor expected. When students are reprimanded for sharing Bible verses with fellow students who request them, when we send out thought police to the homes of SEVEN YEAR OLDS, one has to wonder… have we lost our United States – THE home of religious freedom and free speech?

What do you think? Can we right this ship? Let us know in the comments below.