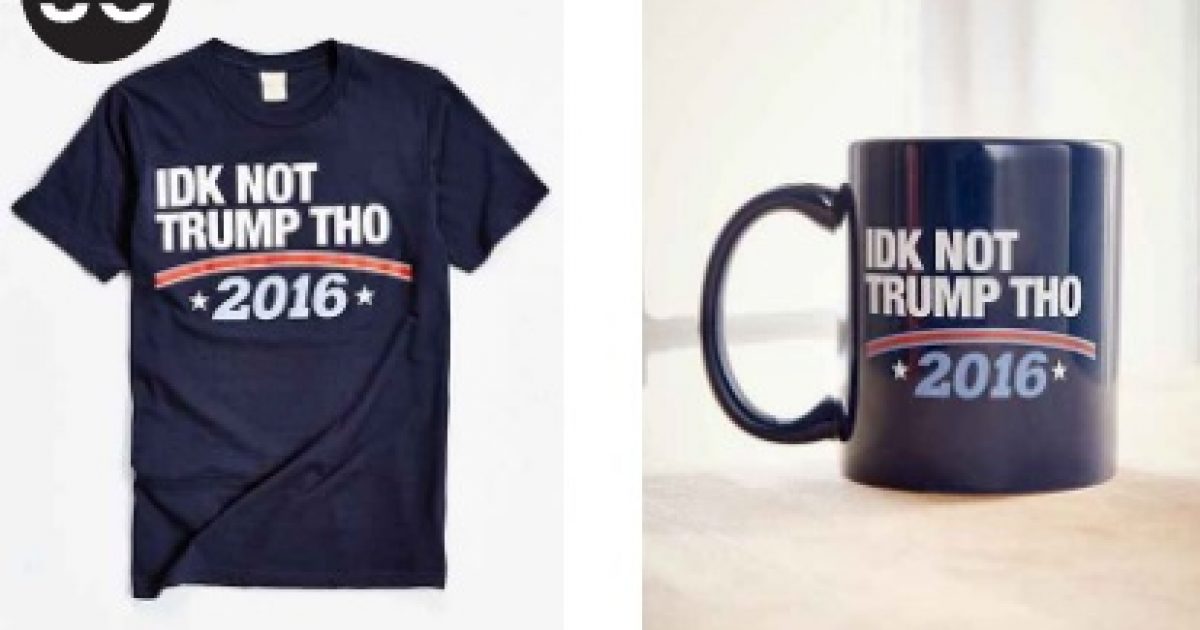 The popular fashion brand Urban Outfitters is trying to capitalize on the apathetic Millennial voter with a line of clothing that says “IDK, Not Trump Tho.”

(IDK is an abbreviation for “I don’t know.” But if you are reading this blog you’re obviously hip and cool, so I bet you already knew that!)

Urban Outfitters (URBN) has a line of politically-branded merchandise that enables customers to show off their political views. Unless the customers are pro-Trump.

The line includes slogans like “IDK Not Trump Tho” and “Vote Trump 20NEVER.” It also includes pro-Hillary Clinton and pro-Bernie Sanders merchandise, and a book titled “Quotations From Chairman Trump,” which is touted on the website as being “Unfiltered. Unabridged. Unauthorized. Unbelievable.”

The clothier says they’re not taking sides, they’re just having fun. “These t-shirts are novelty items, not a political statement on the part of URBN,” a rep for Urban Outfitters said in a statement. “We stock thousands of novelty products such as t-shirts and mugs with popular and/or humorous statements. We don’t commission these products; they are designed by independent artists who submit them to our merchandise buyers. Our product selection rotates frequently and is largely driven by the demand of our customers.”

Progressives in fashion and entertainment are trying so hard to make Hillary Clinton seem cooler, but despite their best efforts, the polling gap continues to shrink.

According to Real Clear Politics, Hillary leads Trump by a miniscule 2.7% nationally, and her numbers continue to drop.

Urban Outfitters is going to have to sell a lot more t-shirts to fix the enthusiasm problem in the Democratic Party.