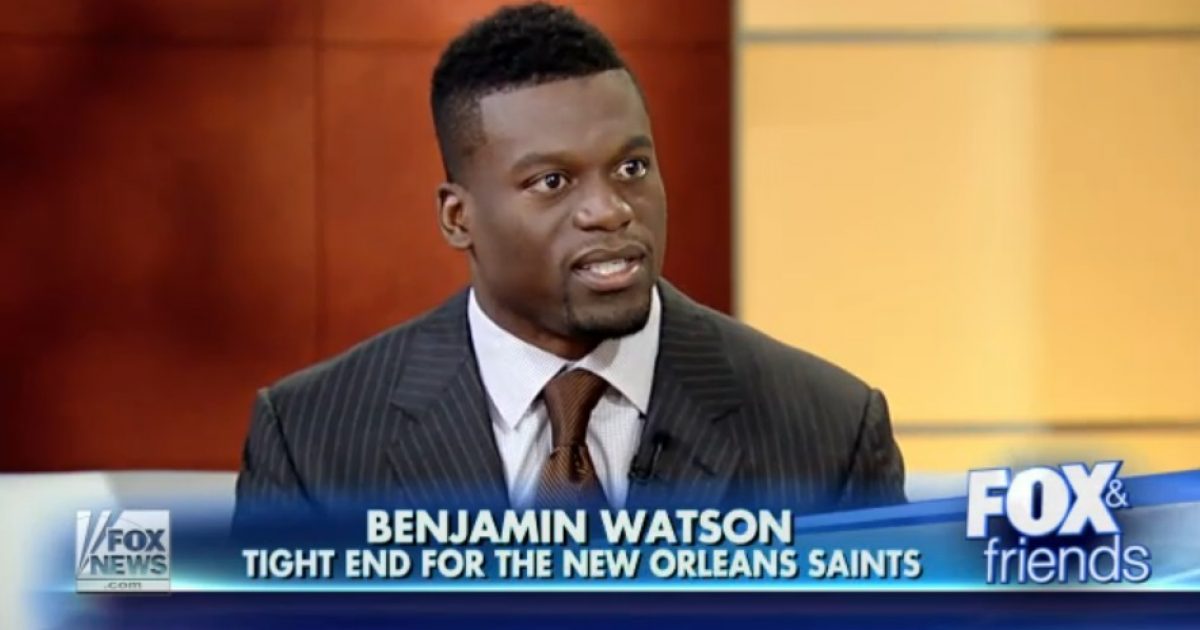 NFL Star Benjamin Watson, who played Tight End for the New Orleans Saints and was recently signed to the Baltimore Ravens, is in the news – but not for a fantastic touchdown catch. Instead, Watson recently stated that Planned Parenthood was created to “exterminate blacks” and “it’s working.”

Before you write off Watson’s claim, consider the fact that while only about 13 percent of Americans are black, more than one-third of all abortions are administered to black women. The number of black babies aborted by Planned Parenthood each year is roughly triple that of white babies, and double the number of Hispanics.

Couple those statistics with this quote from Planned Parenthood’s founder, Margaret Sanger,

We should hire three or four colored ministers, preferably with social-service backgrounds, and with engaging personalities.  The most successful educational approach to the Negro is through a religious appeal. We don’t want the word to go out that we want to exterminate the Negro population, and the minister is the man who can straighten out that idea if it ever occurs to any of their more rebellious members.

Based on these facts, Benjamin Watson’s claim is eerily accurate. As reported by the Christian Post, Watson had a lot to say about this issue:

“I do know that blacks kind of represent a large portion of the abortions, and I do know that honestly the whole idea with Planned Parenthood and Sanger in the past was to exterminate blacks, and it’s kind of ironic that it’s working,” Watson said. “We [as minorities] support candidates, and overwhelmingly support the idea of having Planned Parenthood and the like, and yet, that is why she created it.”

Watson criticized minorities for buying into the abortion agenda and suggested that black and hispanic pregnant teens are encouraged to get abortions rather than keep their babies.

“We are buying it hook, line, and sinker, like it’s a great thing. It’s just amazing to me and abortion saddens me, period. But it seems to be something that is really pushed on minorities and provided to minorities especially as something that they should do,” Watson asserted. “In the public, it seems to be painted that when minorities get pregnant they need to get abortions, especially when it comes to teen pregnancy.

Watson explained that his book mentions how many political ideas, such as minorities should get abortions, are “forced into our heads” through “reinforced culture.”

“We sit here and talk about advancing the black agenda, whatever that means, we talk about our interests, and what’s important to us — like having political power and advancement and all those things — and then we are turning around and we are killing our children,” Watson said. “And we are buying the lie that it’s our personal decision to make.”

“Honestly, I am sympathetic, I am. Because I know it’s a hard decision,” Watson continued. “I don’t know exactly what it’s like to be pregnant and to be a single mom, or even to be a married mom and not want the child. I would never assume people are having abortions flippantly. I know people have them for convenience, but that doesn’t mean it’s not a tough choice for the mothers to make, so I always want to be sympathetic to that.”

But that wasn’t all. Watson also took issue with dead-beat dads.

“[A] lot of the women wouldn’t be having abortions if the men would step up and be a part of what they are already biologically a part of. Raising children and having children, even though the women birthed the child, is designed for two people to do it,” Watson stated. “And there is so much undue stress and pressure on the woman if the other one isn’t there.”

Watson argued that a fault in the process is that many men would rather have abortion be a “women’s issue” so that they don’t have to “step up and make a decision.”

“Any idea that a man doesn’t have a role in it is not true, and is simply more about politics and making a man’s life easier,” Watson stressed. “If you are going to say, ‘It’s your choice’ and she decides on an abortion, then at least be man enough to go with her through the entire process. You should have to sit with her through the entire procedure (and recovery) if you are going to go that route.”

Watson, a 12-year veteran tight end who is beginning a new chapter in his career this season with the Baltimore Ravens, recalled a time where he has had to talk to a one of his NFL teammates whose girlfriends was facing an unplanned pregnancy.

“His girlfriend was pregnant and he had that look like, ‘I don’t know what to do’ and I know that abortion may have very well been a possibility, although we didn’t discuss it specifically,” Watson explained. “My whole speech to him was encouraging him about what an awesome opportunity it is to raise a child, to give the child a home, to love that child, and that God entrusted him with another life, and what a responsibility and the privilege that is.”