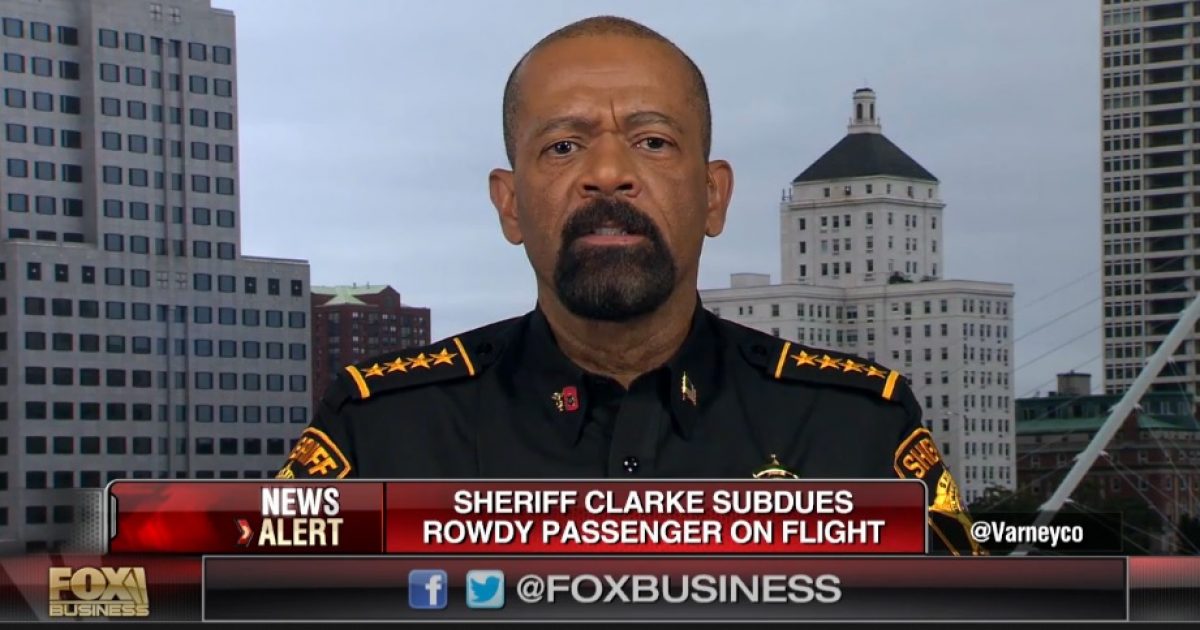 When a drunk man intimidated passengers on a plane headed for North Carolina, Milwaukee County Sheriff David Clarke didn’t think twice before taking him down.

According to Fox Business:

“This goof took the cabin over like it was his private jet. He was moving up and down the aisles, he was in different seats. He was intoxicated, cursing and swearing. It was very intimidating for a lot of the passengers and the flight crew on that plane and so I kept my eyes on him the entire time… I did [what] was instinctive in me; that was to protect and take action. And I just had to pick a spot, I didn’t want to have to be grappling with this guy for an hour,” he said.

Sheriff Clarke said reasonable force was required. “When I told him to sit down, he wouldn’t. So, then I shoved him face down into the seat, pinned him against the seat and put one arm behind his back, told him to stay there [and] not resist arrest. I told the flight attendant to radio for police at the gate, to have the police meet me there – they did. When they boarded, I asked the officer who came up to me, I said, ‘give me your handcuffs.’ She did, and then I handcuffed him, [and] turned him over. I didn’t worry about jurisdiction or that nonsense. I had to worry about protecting people,” he said.

He also said the passenger personally berated him. “He was using profanities at one point, you know, saying, ‘Sheriff what the blank are you going to do about it?’…but that, like many other police officers, we don’t care about that. We don’t care about color and gender, whatnot, we care about what the law is, we care about protecting people, and that’s what I did,” he said.

Sheriff Clarke is somewhat famous for his no-nonsense attitude, so this incident went down exactly how one might have expected….

Don’t act like a belligerent jerk on an airplane with Sheriff David Clarke. Lesson learned!