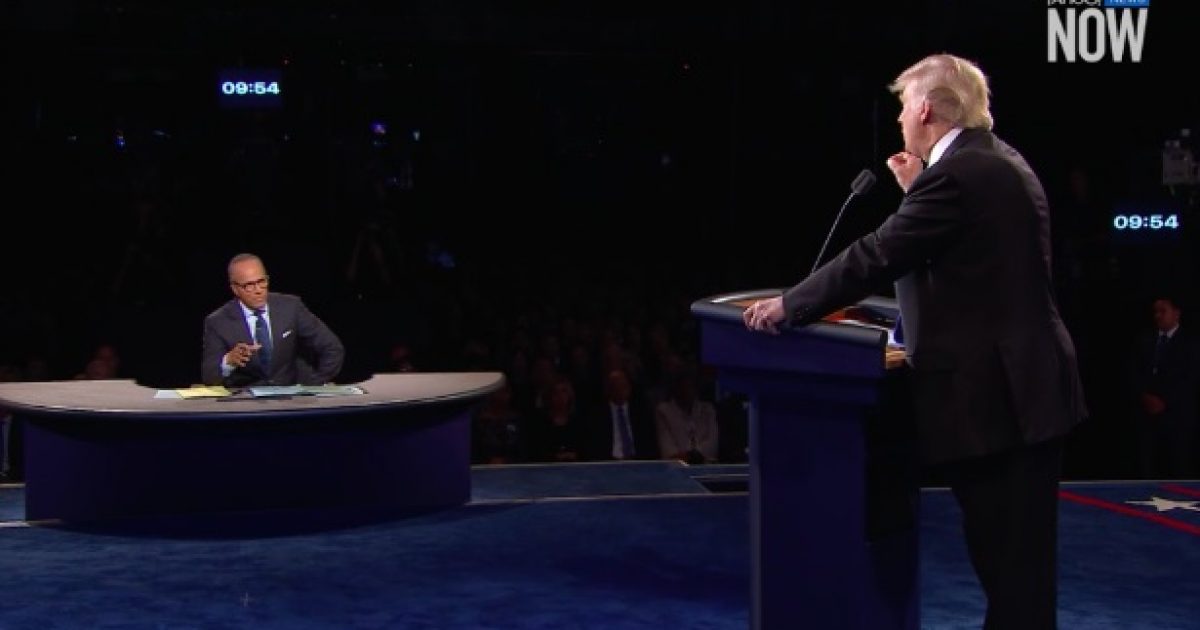 Leading into the first presidential debate, almost half of likely voters believed the moderator would favor Hillary Clinton. It turns out, they were right.

Nothing on emails. Nothing on the corrupt Clinton Foundation. And nothing on #Benghazi. #Debates2016 #debatenight

Tax returns. Holt never asked Clinton about her e-mail scandal, about Benghazi, or about the Clinton Foundation and its dubious dealings. But he did ask Trump about his tax returns, arguing — not asking — that there might be questionable information in them that the American public deserved to hear.

Stop-and-frisk. After an exchange between the candidates over the policy of “stop-and-frisk,” Holt interjected to bolster Clinton’s point by stating, erroneously, that stop-and-frisk had ended in New York because it had been declared unconstitutional by a court. Trump countered, correctly, that the new mayor had canceled the policy before the litigation was over.

“A presidential look.” Towards the end of the debate, Holt asked Trump about what he meant by saying Hillary Clinton did not have “a presidential look.” He did so after noting that Clinton had become “the first woman” to be nominated for president by a major political party, thus setting Trump up as a sexist. As Trump answered, Holt interrupted him, then gave Clinton a chance to respond with her talking points about Trump’s past comments on women.

Iraq War. The question of whether Trump supported the Iraq War or not has been widely debated. What is beyond doubt is that Hillary Clinton voted for it. Holt only represented one side of the debate about Trump, and never asked Clinton about her own vote.

It’s no secret that the mainstream media is the public relations wing of the Hillary Clinton campaign. When it comes to the Democrats, journalists in the hot seat moderate. When it comes to Republicans, debate moderators turn into real-time ombudsmen and fact checkers.