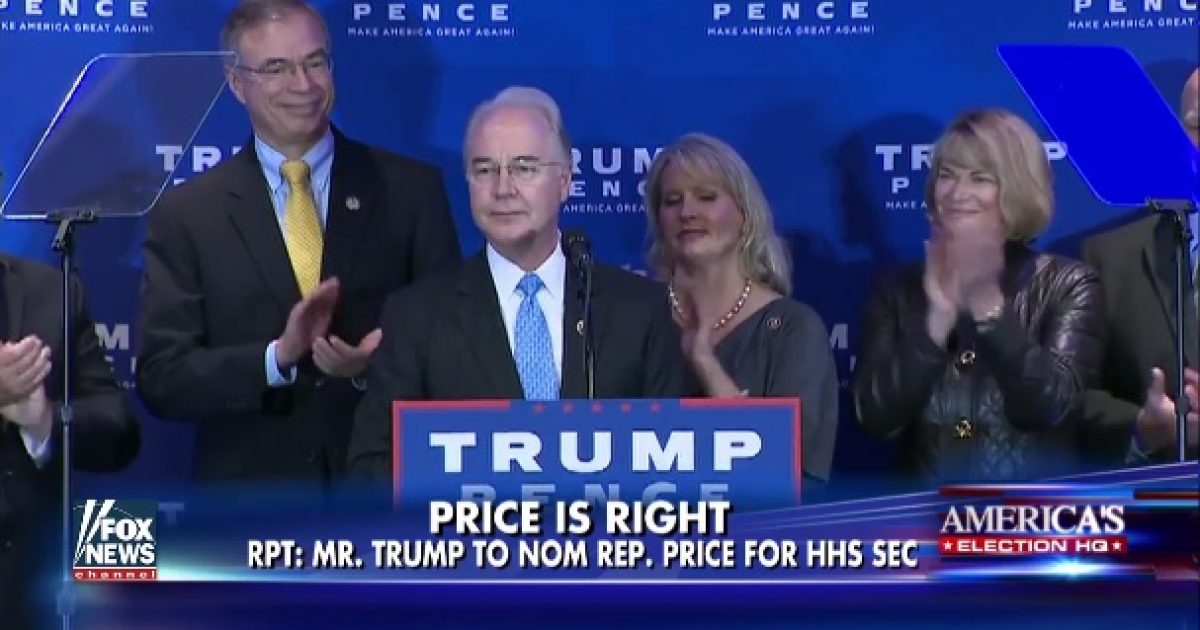 If confirmed by the Senate, Price will play a central role in Republican efforts to repeal and replace ObamaCare. Trump has pledged to move quickly on overhauling his predecessor’s signature measure, but has been vague about what he hopes to see in a replacement bill.

“Chairman Price, a renowned physician, has earned a reputation for being a tireless problem solver and the go-to expert on healthcare policy, making him the ideal choice to serve in this capacity,” Trump said in a statement. “He is exceptionally qualified to shepherd our commitment to repeal and replace Obamacare and bring affordable and accessible healthcare to every American. I am proud to nominate him as Secretary of Health and Human Services.”

…Price, a 62-year-old six-term congressman and orthopedic surgeon, has chaired the House Budget Committee for the past two years. A bookish conservative from the Atlanta suburbs, Price has worked closely with House Speaker Paul Ryan to assemble GOP budgets aimed at reducing the annual deficit. “I am humbled by the incredible challenges that lay ahead and enthusiastic for the opportunity to be a part of solving them on behalf of the American people,” Price said Tuesday.

While the mainstream media is distraught by the announcement, conservatives and libertarians are praising the decision:

My friend and fellow physician @RepTomPrice is a great pick for Secretary of HHS. Let's repeal Obamacare & fix our broken healthcare system

Tom Price is the HHS Secretary you pick if you are dead serious about repealing Obamacare. https://t.co/Mbb3wjD4jq

.@RepTomPrice is an exceptional choice by @realDonaldTrump to help lead us out of the Obamacare debacle. #HHS #GoodChoice

Politico has compiled a list of Trump Administration appointees so far. You can read the list here.