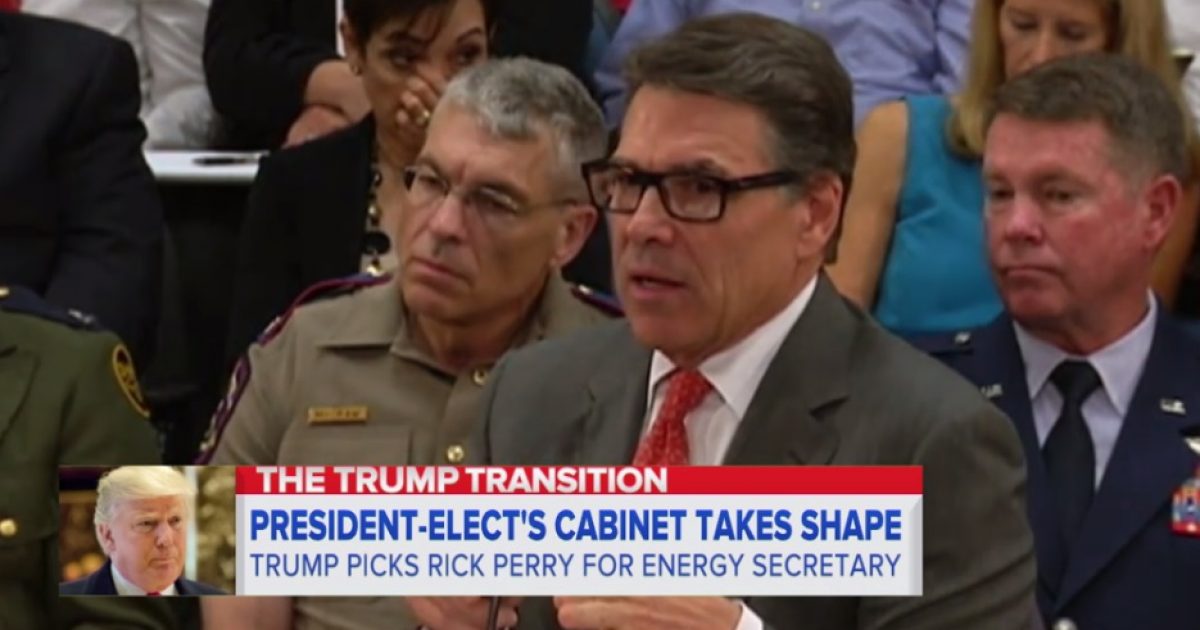 President-elect Donald Trump officially announced Rick Perry will serve as Secretary of Energy in his administration.

President-elect Donald Trump officially named former Texas Gov. Rick Perry as his choice for secretary of energy in a release this morning. Praising Perry’s gubernatorial experience, Trump said Perry would “do an amazing job” in his new role.

“As the Governor of Texas, Rick Perry created a business climate that produced millions of new jobs and lower energy prices in his state, and he will bring that same approach to our entire country as Secretary of Energy,” Trump said in a statement released by his transition team.

Perry said in a statement that he was “humbled” by Trump’s trust in him. “As the former governor of the nation’s largest energy producing state, I know American energy is critical to our economy and our security. I look forward to engaging in a conversation about the development, stewardship and regulation of our energy resources, safeguarding our nuclear arsenal, and promoting an American energy policy that creates jobs and puts America first.”

Rick Perry is sure to eliminate waste, fraud, and abuse within the Department of Energy. In the past, Perry announced numerous times that he believes the department should be eliminated altogether.

As expected, elitist progressives are already having a meltdown:

To: New Energy Secretary Rick Perry- How bout we power the country with a turbine connected to the founding fathers rolling in their graves?

Hey little buddy @realDonaldTrump you do know that Rick Perry is all bone from the neck up? Right?

Rick Perry to head agency he couldn’t think of but still wanted to abolish. You can’t make this stuff up folks.

Rick Perry, climate change skeptic, is President-elect Trump's choice for secretary of energy. The current secretary is a nuclear physicist.