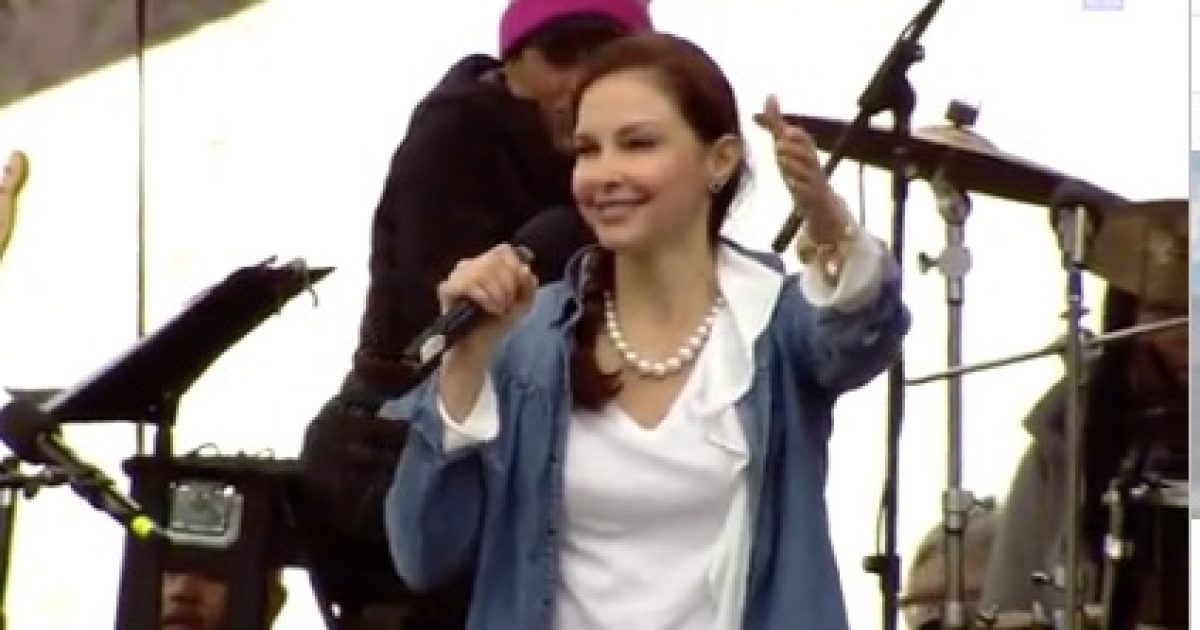 President Donald Trump is not getting a presidential honeymoon.

A day after his inauguration, Trump is facing women protesters participating in the Women’s March on Washington, D.C.

Women marchers are protesting in other cities as well.

The protesters are hearing from speakers from the radical left including actress Ashley Judd.

During her speech, Judd recited a poem, “I am a nasty woman,” that makes numerous critical and outrageous statements about Trump.

Interrupting a speech being given by activist Michael Moore, Judd explained,”I bring you words from Nina Donovan,” a 19-year-old poet from Tennessee.

The actress then belted out Donovan’s slam poetry, beginning with, “I am a nasty woman. Not as nasty as a man who looks like he bathes in Cheeto dust, a man whose words are a dis to America, Electoral College-sanctioned hate speech.”

“I feel Hitler in these streets, Nazis renamed,” Judd continued, before turning to Trump’s disturbing comments about his daughter Ivanka.

Protesters are outraged over comments made about women by Trump, yet they remain silent about President Bill Clinton’s sexual exploits including actions in the White House.

Selective outrage is a hallmark of progressive activists.

Here is the Women’s March on Washington’s Mobile Day of Guide that includes the mission statement (see below).

The rhetoric of the past election cycle has insulted, demonized,
and threatened many of us – immigrants of all statuses,
Muslims and those of diverse religious faiths, people who
identify as LGBTQIA, Native people, Black and Brown
people, people with disabilities, survivors of sexual assault
– and our communities are hurting and scared. We are confronted
with the question of how to move forward in the
face of national and international concern and fear.

In the spirit of democracy and honoring the champions of
human rights, dignity, and justice who have come before us,
we join in diversity to show our presence in numbers too
great to ignore. The Women’s March on Washington will
send a bold message to our new government on their first
day in office, and to the world that women’s rights are human
rights. We stand together, recognizing that defending
the most marginalized among us is defending all of us.

We support the advocacy and resistance movements that reflect
our multiple and intersecting identities. We call on all
defenders of human rights to join us. This march is the first
step towards unifying our communities, grounded in new
relationships, to create change from the grassroots level up.
We will not rest until women have parity and equity at all
levels of leadership in society. We work peacefully while
recognizing there is no true peace without justice and equity
for all.