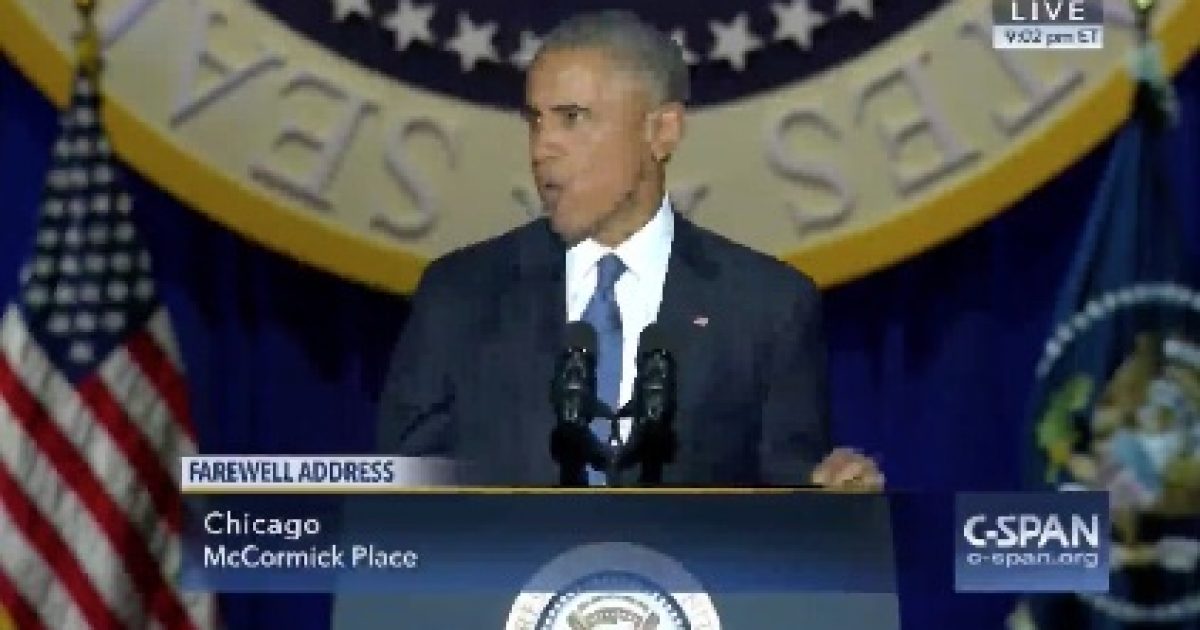 Here are the top five:

1. He Believes Change Comes From Ordinary People. Obama said, “I learned that change only happens when ordinary people get involved, get engaged, and come together to demand it. After eight years as your president, I still believe that.” Really? That’s odd. His signature legislation forced benighted Americans to purchase health insurance and required religious Americans to forego their religious objections to contraceptives and abortion coverage. This is the same fellow who once referred to half the electorate as bitter clingers obsessed with God and xenophobia thanks to their poverty, and labeled the Tea Party as a terrorist entity.

2. American Exceptionalism Lies In Our Capacity To Change. No, actually, all people are capable of change, if some more so than others. Change may be worthwhile, but that’s not what makes America unique. What makes America exceptional is the foundational principles of individual freedom and limited government enshrined in our founding documents. But Obama said, “So that’s what we mean when we say America is exceptional. Not that our nation has been flawless from the start, but that we have shown the capacity to change, and make life better for those who follow.”

3. He Created A Thriving Economy. Obama bragged about “revers[ing] a great recession, reboot[ing] our auto industry, and unleash[ing] the longest stretch of job creation in our history.” Actually, he was responsible for the weakest recovery in American history, he blew out the national debt, and he ensured that trillions of dollars in investment money remained on the sidelines, as well as keeping underemployment at significant highs.

4. He Fixed Cuba. Obama bragged about “open[ing] a new chapter with the Cuban people.” But the Cuban people are still stuck living under a communist tyranny that has now been significantly enriched and empowered by Obama’s support.

5. He Disarmed Iran. Obama said he had “shut down Iran’s nuclear weapons program without firing a shot.” That’s patently untrue. The Associated Press reported yesterday that the Obama administration greenlit a shipment of tons of uranium to Iran. Iran has been secretly pursuing nuclear development, and Obama’s been ignoring it, as well as their material support for terrorism.

Despite Obama’s spin, the record shows his presidency was a disaster.