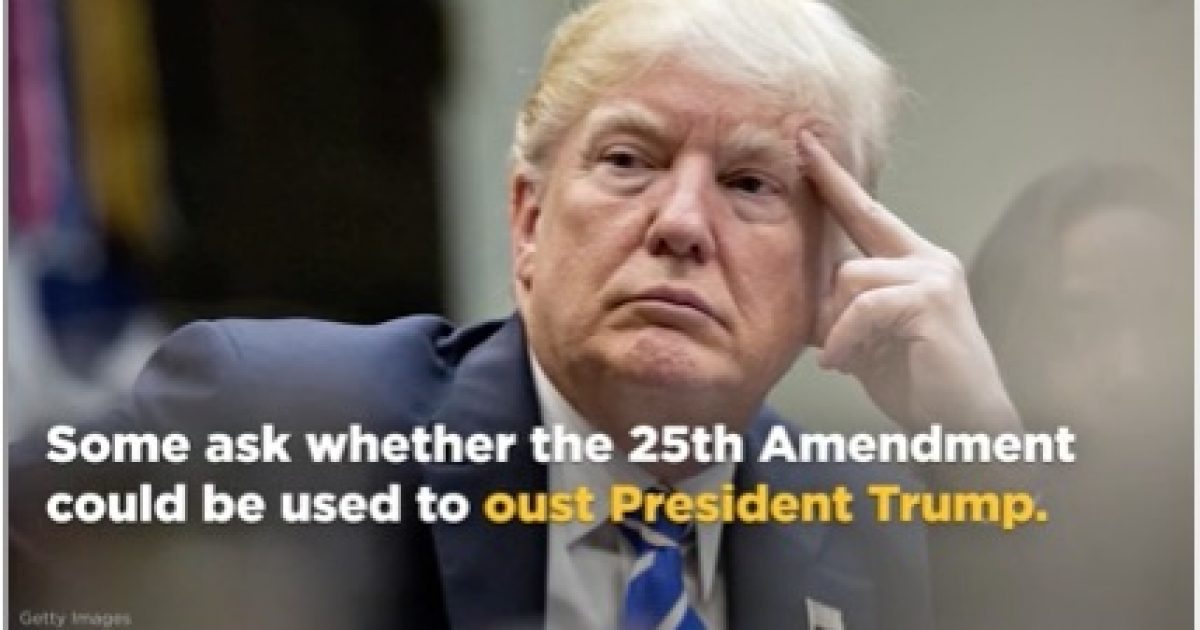 The desperate political party is at it again.

With the Russia collusion claim losing steam, Democrats have devised a new strategy to remove President Trump from office.

Led by Representative Jamie Raskin (D-MD), a group of Democrats want to remove Trump from office under the 25th Amendment.

The 25th Amendment became effective in the 1960’s and sets up a mechanism where a president can be forced from office because they are “unable to discharge the powers and duties.”

According to the Democrats pushing this strategy, Trump is mentally unstable and therefore he can’t possibly perform his responsibilities as president.

Raskin introduced a bill in the House of Representatives that would establish a congressional “Oversight Commission on Presidential Capacity.”

The bill has the support of a number of Democrats including party leaders such as former Democrat National Committee head Representative Debbie Wasserman Schultz (D-FL) and Representative John Conyers (D-MI) the ranking Democrat on the House Judiciary Committee.

Raskin defended his effort to use the 25th Amendment in an interview with Yahoo News, “In case of emergency, break glass,” and he added, “If you look at the record of things that have happened since January, it is truly a bizarre litany of events and outbursts.”

In the same news story, Raskin claims some Republicans expressed interest in his bill.

The Democrat strategy is considered a long-shot especially since it would require the support of Vice President Mike Pence.

Despite the long odds, the new strategy provides Democrats with a new sound bite to undermine Trump.

Going forward Democrats will respond to Trump’s comments and Tweets by questioning his mental stability with the goal of branding Trump as crazy.

The new strategy to undermine Trump will likely find support from the left-wing media that shares the Democrats goal.

Democrats pursuing this strategy are also taking a risk that this effort will backfire.

While Democrats pursue the 25th Amendment effort they are again branding their party as extreme and obstructionist.

For example, a recent poll from Pew Research reported a significant rise in the percentage of voters that feel the Democrat party is extreme.

Last March, 37 percent felt the Democrat Party was too extreme and now that feeling has risen to 45 percent.

Running against Trump did not work for Hillary Clinton or the recent open Congressional seat elections and it’s unlikely to work in the future.

The Democrat Party is suffering from a lack of policy ideas and leadership and promoting the 25th Amendment will not help Democrats win more legislative seats in 2018.