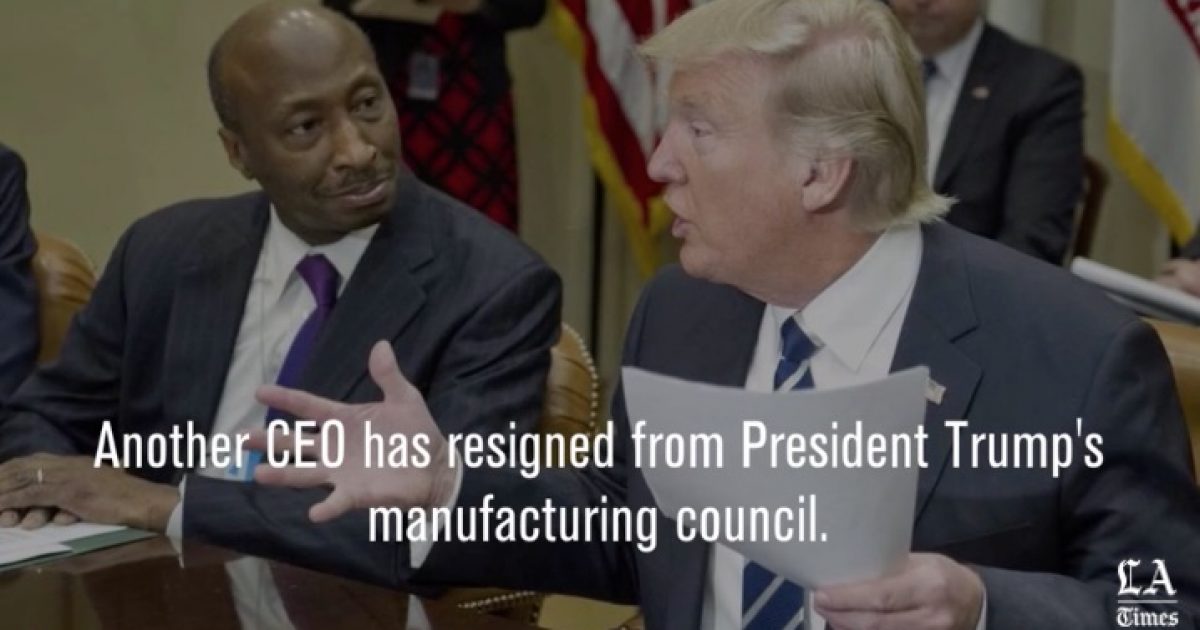 Business council closures have NOTHING to do with Charlottesville

President Trump closed his Manufacturing Council and the Strategy and Policy Forum business advisory councils because CEOs panicked over of the media circus surrounding the president’s comments about the violence in Charlottesville, Va.
With a keen focus on U.S. job creation, Trump wanted to include CEOs in a dialogue to determine the best way to grow the economy.

To the untrained eye, it appeared the industry giants were leaving the business councils as a demonstration of corporate morality. The storyline goes the CEOs wanted to set themselves apart from Trump, who was being portrayed by his media enemies as a white supremacist sympathizer.

The real reason is much deeper. The CEOs ran for the exits because they are progressive elites and members of the ruling class and were finding out that, unlike former President Obama, White House access did not equate to policy favors.
Social pressure from the media and left-wing activist groups over Charlottesville only catalyzed the breakup of the uneasy marriage between Trump and his band of politically correct business advisory members.

The CEOs did not need much of a push to run from Trump, since the group included a collection of politically liberal individuals that were uncomfortable with Trump from the start.
Recall that Big Business money was funding Hillary Clinton’s campaign, not Trump. And the president killed the Trans-Pacific Partnership — a policy loved by global business leaders.
Big Business is aligned with the political establishment that gave many of them a revenue stream from Big Government.

In contrast, Trump is focused on policies that benefit the forgotten men and women in the U.S. and threatens business strategies.
First, it’s important to note that the CEO exit started before Charlottesville and was driven by policy differences — not false claims of white supremacy. Tesla CEO Elon Musk bolted from the manufacturing council when Trump decided to have the U.S. leave the Paris climate change agreement.

The company’s products, electric cars, and solar panels were built on direct government support and a renewable energy policy. Trump is driving U.S. energy policy the other way by promoting the development and use of fossil fuels.
Telsa’s business got a huge boost from a $465 million Department of Energy loan, and the company still benefits from a $7,500 federal tax credit that buyers get for purchasing its electric vehicle.

Sensing the glory days of climate change propaganda and money were coming to an end, Musk jumped off the Trump train.

Disney CEO Bob Iger, a progressive Democrat and big financial backer of Mrs. Clinton, also left a business council over the Paris agreement. Charlottesville provided an easy way out for remaining CEOs by giving them an excuse to leave on a “moral high ground.” The nudge from left-wing activists and the media was all they needed.

Merck CEO Kenneth Frazier waved the morality card in justifying his decision, stating that it “as a matter of personal conscience to take a stand against intolerance and extremism.”
It’s policy, not “personal conscience” that worries Frazier. Frazier is concerned Trump is going to end some of the policy favors that Obama gave drug companies via Obamacare, such as blocking drug imports and not having to negotiate drug prices with the government.

The last thing Frazier wants is the embarrassment of not delivering on political access. Frazier gained prominence at Merck as a lawyer defending the company from lawsuits over Vioxx — a prescription pain medicine. He is credited with saving the company tens of billions of dollars through a class-action lawsuit settlement of $4.85 billion.

Having such high-profile litigation experience, Frazier must have come across media stories that twisted the facts to make a point against a greedy drug company that promoted and sold a dangerous drug.

Yet Frazier tossed aside that experience when it came to analyzing the way the agenda-driven left-wing media manipulated Trump’s comments to cause maximum political damage.

The media ignored the timing of Trump’s Charlottesville comments, which were made while the clashing groups were still in the streets and gave no credence to his real-time condemnation of the display of hatred and violence. Instead, the media slammed him for not specifically calling out specific white supremacist groups.

Frazier was hailed as a hero in a Fortune commentary, “Ken Frazier: The Strongest Man in the World,” for leaving the business council on the Monday following Trump’s initial comments.

Charlottesville was only an excuse for CEOs abandoning the business advisory groups. The real reason is Big Business is part of the ruling class that despises Trump and the forgotten men and women that elected him.