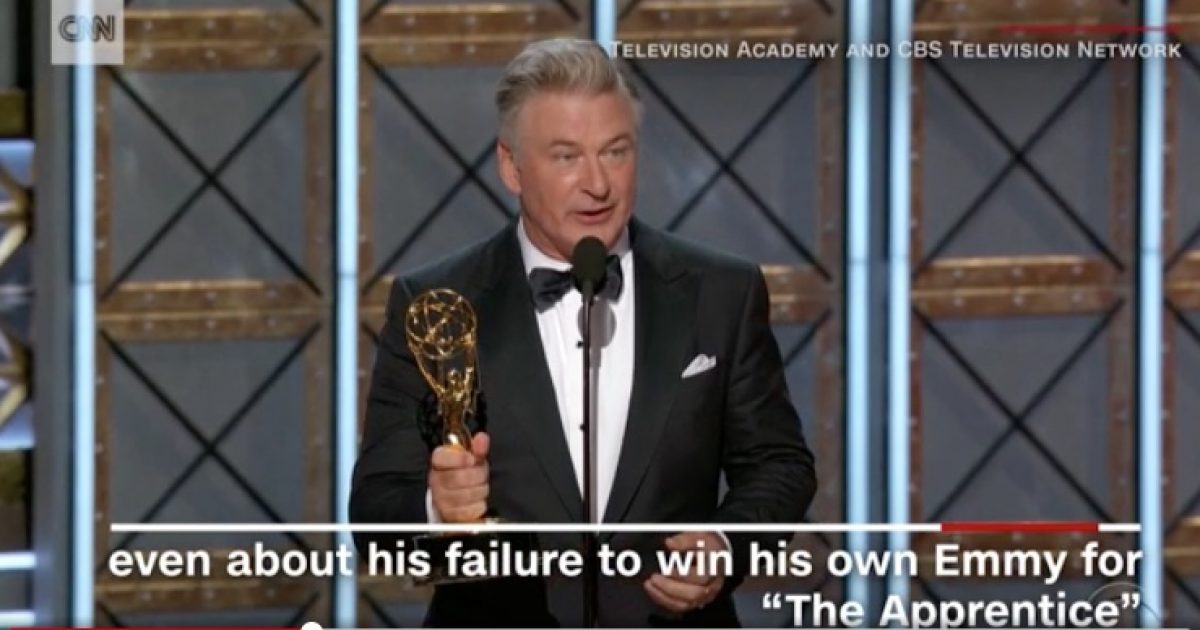 Criticism of Trump was a consistent theme throughout the evening and late-night TV host Stephen Colbert led the attack.

He admitted that the biggest star of the year, in fact, is Trump, reminding the audience and viewers at home of the former reality star’s obsession with the Emmys.

“However you feel about the president, you can’t deny that every show was influenced by Donald Trump in some way,” he said, naming House of Cards and the new season of American Horror Story. “We all know the Emmys mean a lot to Donald Trump because he was nominated multiple times for Celebrity Apprentice, but he never won. If he had won an Emmy I bet he wouldn’t have run for president.”

He added, “So in a way, this is all your fault — I thought you people loved morally compromised antiheroes.”

In context, Colbert’s opening comment was moderate in comparison to comments made during the night.

Jane Fonda also weighed in with her co-stars from the movie 9 to 5:

During an on-stage reunion with 9 to 5 stars Jane Fonda, Dolly Parton and Lily Tomlin, the trio made the plot of the 1980 classic relevant to today. Like in their movie, they refuse to be controlled by a “’sexist, egotistical, lying, hypocritical bigot” in 2017, they said in unison.

The race card also made an appearance during Donald Glover’s acceptance remarks.

Donald Glover won the comedy lead actor trophy for his role on “Atlanta” at the 69th annual Primetime Emmy Awards in Los Angeles.

He also pulled a rare auteur coup in winning the Emmy for comedy series directing as well. The win for directing marked an Emmy milestone as he became the first African-American to win in the category.

In the process of making his speech Sunday night, Glover jokingly give a shoutout to President Donald Trump… for an unconventional reason.

“I want to thank Trump for making black people number one on the most-oppressed list,” he said. “He’s probably the reason I’m up here.”

The Trump bashing did not go over well with the public as measured by viewers.

The Hollywood Reporter wrote about the falling viewership:

The Emmys are becoming a tougher sell for viewers. For another year, initial ratings for the TV awards are down — this time slipping to an all-time low.

Adjustments could put the total audience ahead of the previous year’s low, but the 8.2 overnight rating among metered market households is down another 2 percent from the previous year. That means that the final tally for the 2017 Emmys, hosted by Stephen Colbert on CBS, is on track to slip below the 11.3 million viewers (and a mere 2.8 rating among adults 18-49) that tuned in during 2016.

The data shows Hollywood is out of touch with the American public.