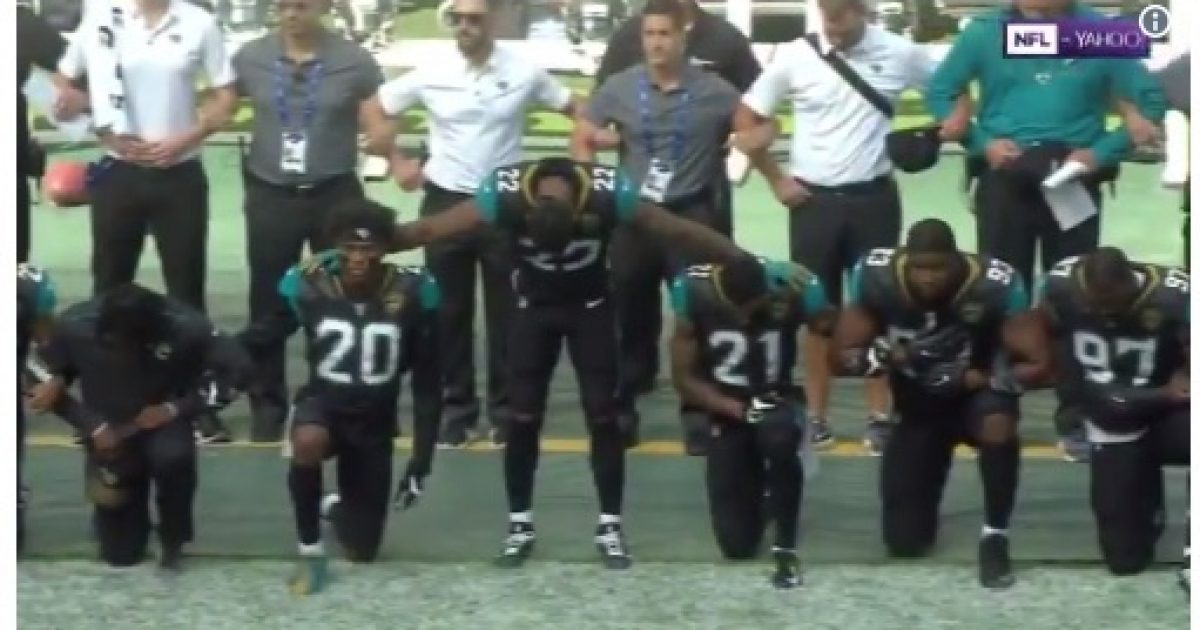 Football players from the Baltimore Ravens and the Jacksonville Jaguars protested by kneeling down during the National Anthem at Wembley Stadium in London, England, on Sunday.

In contrast, all the players stood to respect, “God Save the Queen,” the royal United Kingdom anthem.

At the start of Sunday’s first NFL game, members of the Baltimore Ravens and Jacksonville Jaguars sent a powerful message as the majority stood linking arms, while a number of others took a knee in response to President Trump’s tweet urging fans to boycott the sport until owners “fire or suspend” players who protest during the national anthem.

One Ravens player stood alone, but seemed to be in prayer. All players appeared to stand for the playing of the British anthem, “God Save the Queen.”

As noted in the story, the players are reacting to comments made by President Trump about football player protests during a rally in Alabama on Friday night.

“Wouldn’t you love to see one of these NFL owners, when somebody disrespects our flag, to say ‘get that son of a b**** off the field right now – he’s fired,'”

On Sunday, Trump continued to target the NFL.

President Trump on Sunday called for football fans to boycott N.F.L. games unless the league fires or suspends players who refuse to stand for the national anthem, saying that players must “stop disrespecting our flag and country.”

“If NFL fans refuse to go to games until players stop disrespecting our country, you will see change take place fast,” Mr. Trump wrote, on the second weekend morning in a row in which he vented over the issue on social media. “Fire or suspend!”

The player protests are escalating out of control as evidenced by the outrageous display of disrespect by the Ravens and Jaguars players in London.

Honoring a foreign nation while disrespecting the U.S. is an outrageous act that will ignite a cultural war between patriotic Americans and atheletes.