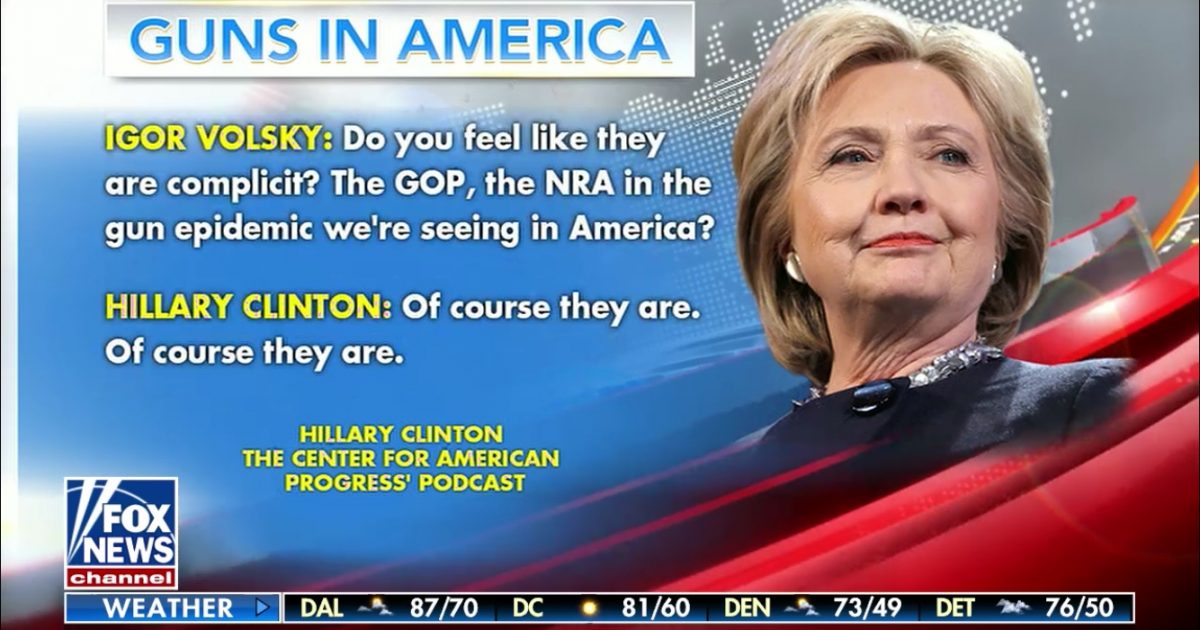 Clinton was very quick to comment on the shooting. The morning after the tragic event she attacked the NRA in a tweet:

Our grief isn’t enough. We can and must put politics aside, stand up to the NRA, and work together to try to stop this from happening again.

In the days following the tragedy, Clinton is continuing to attack the NRA and Republicans by blaming them for gun violence.

The Washington Free Beacon reported on Clinton’s interview on the Center for American Progress’ podcast:

Hillary Clinton, in the wake of the Las Vegas mass shooting, said on Monday that Republicans are “captured by the NRA” and they are “complicit” in violent crime.

The two-time presidential candidate spoke on the Center for American Progress’ “Thinking Cap” podcast, where she spoke about the Las Vegas shooting and advocated for “broad-based social change” toward gun control, Mediaite reported. Clinton argued gun deregulation is the result of the NRA’s lobbying power over the Republican Party.

“The way the Republican Party has been captured by the NRA, which has intimidated a lot of Democrats … is one of the worst developments of the last 25 years,” she said.

Clinton is not the only Democrat trying to exploit the mass shooting tragedy.

“Although many details of this mass shooting remain unclear, one thing is certain: yet again, we are watching in horror as another American community is torn apart by the terrible devastation wrought by a gunman. My heart breaks for Las Vegas: the victims, their families, their friends, and their entire community. It has been barely a year since what was previously the largest mass shooting in American history – the deadly attack at Pulse nightclub. In the interim, thousands more have been lost to the daily, ruthless toll of gun violence. Still, Congress refuses to act. I am more than frustrated, I am furious.”

Democrats are using the tragedy to advance a gun control agenda.