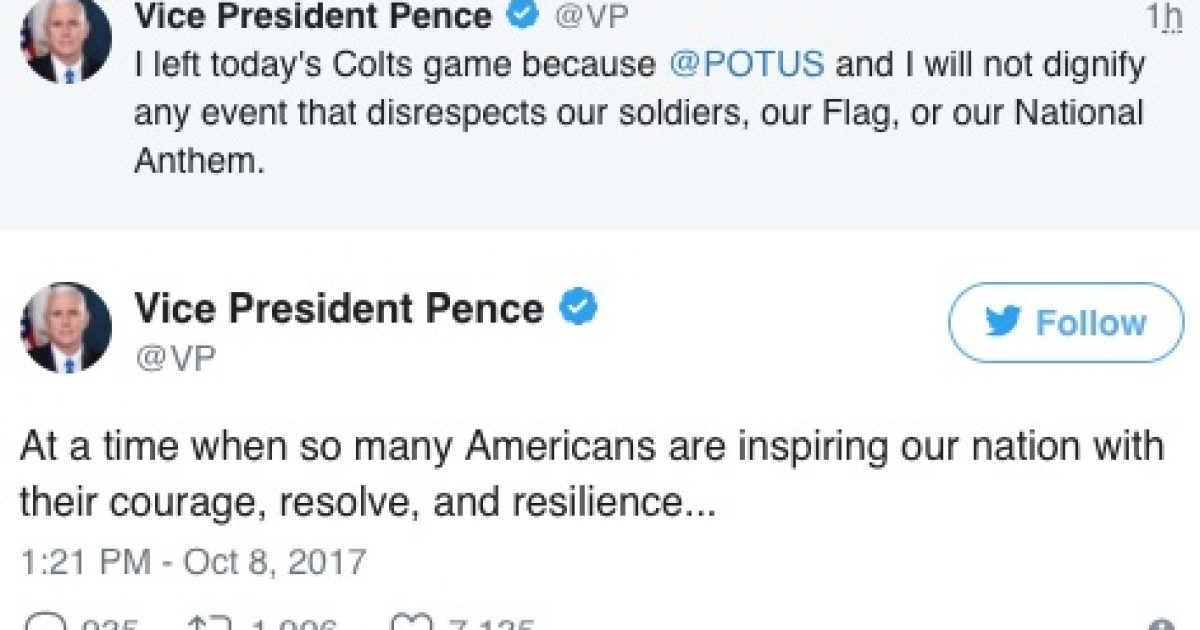 The NFL just doesn’t get it.

Allowing players the freedom to carry on with their on the field protests during the National Anthem is destroying the NFL brand.

The league is suffering the consequences from the player’s antics and today it got much worse.

Vice President Mike Pence and his wife Karen left the football game between the Indianapolis Colts and San Francisco 49ers after players from the 49ers decided to kneel during the National Anthem.

Earlier Pence tweeted he was excited to attend the game but that emotion was short lived.

I left today’s Colts game because @POTUS and I will not dignify any event that disrespects our soldiers, our Flag, or our National Anthem.

The news about Pence leaving the game will reignite news coverage of player protests and increase the anger from fans.

The NFL is experiencing negative consequences from the protests.

Over just one month of player, coach, and owner protests of the flag and National Anthem, the National Football League has gone from America’s sport to the least liked of top professional and college sports, according to a new poll.

From the end of August to the end of September, the favorable ratings for the NFL have dropped from 57 percent to 44 percent, and it has the highest unfavorable rating – 40 percent – of any big sport, according to the Winston Group survey provided exclusively to Secrets.

In looking at a more specific audience, males 34-54, NFL favorables fell 31 percent, going from 73 percent to 42 percent. Among this group the NFL has a surprising negative image, as it went from +54 percent in August to -5 percent in September.”

Ironically, Colin Kaepernick, the former quarterback for the San Francisco 49ers who started the protest movement last year, now says he would stand during the National Anthem.

Now a free agent, Kaepernick had said this past spring that he would stand if he got a chance to play again — a pledge that was reported again Sunday by Jason La Canfora on CBS’ “The NFL Today.”

“He’s not planning on kneeling,” said La Canfora, who spent time with Kaepernick on Saturday night. “He’s going to donate all his jersey sales. He’s planning on standing for the anthem — if given the opportunity.”

Pence showed good leadership by bolting from the game after players disrespected the U.S. and more should follow his lead.