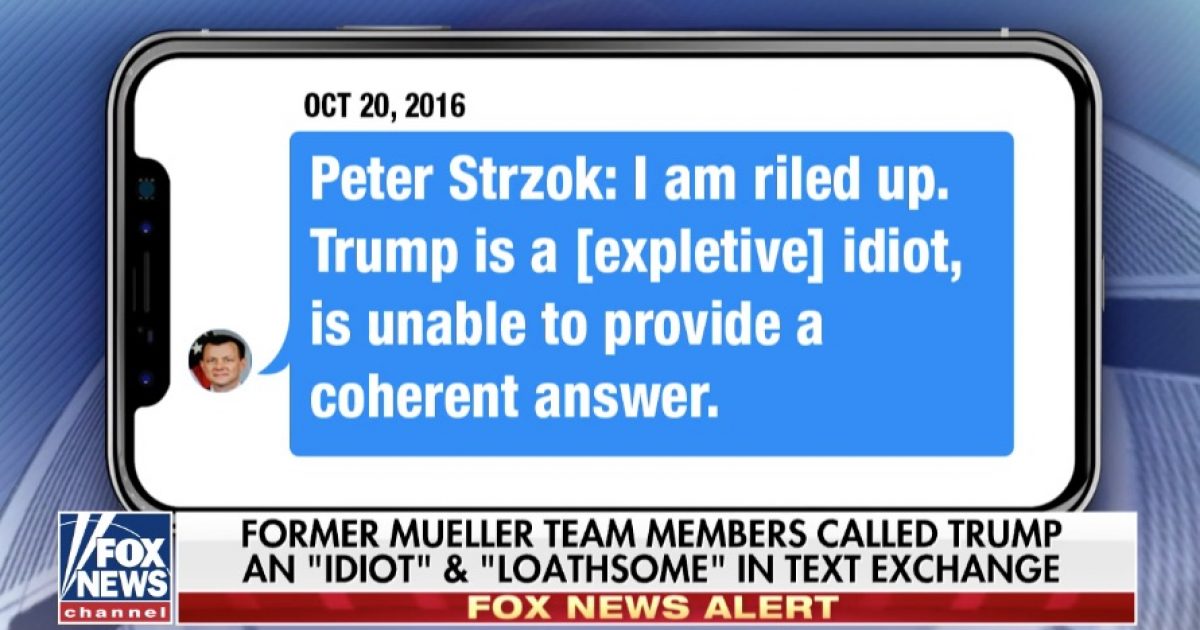 The text messages from Strzok were sent to Lisa Page, a colleague at the FBI and his alleged girlfriend.

Text messages between FBI officials Peter Strzok and Lisa Page in 2016 that were obtained by Fox News on Tuesday refer to then-candidate Donald Trump as a “loathsome human” and “an idiot.”

More than 10,000 texts between Strzok and Page were being reviewed by the Justice Department after Strzok was removed from Special Counsel Robert Mueller’s Russia probe after it was revealed that some of them contained anti-Trump content.

The text messages also show Strzok was terrified President Trump could get elected and was unhappy about Jeff Sessions becoming Attorney General.

He also reacted negatively to the possibility of Jeff Sessions becoming Attorney General.

Mueller removed Strzok over the text messages presumably because it exposes bias that calls into question the credibility of the entire investigation looking into possible collusion between President Trump’s campaign team and Russia.

Page was also a former member of the Mueller team.

Page’s and Strzok’s apparent political sympathies extended to Congress, too. They also wrote messages disparaging House Speaker Paul Ryan, with Page expressing the hope that Ryan “fails and crashes in a blaze of glory” and Strzok responding that the GOP “needs to pull their head out of that *ss. Shows no sign of occurring any time soon.”

The bias exhibited by former members of Mueller’s investigative team raises serious questions about the real intention of the special counsel investigation and exposes the feelings of federal bureaucrats that are consistent with concerns about the Deep State.