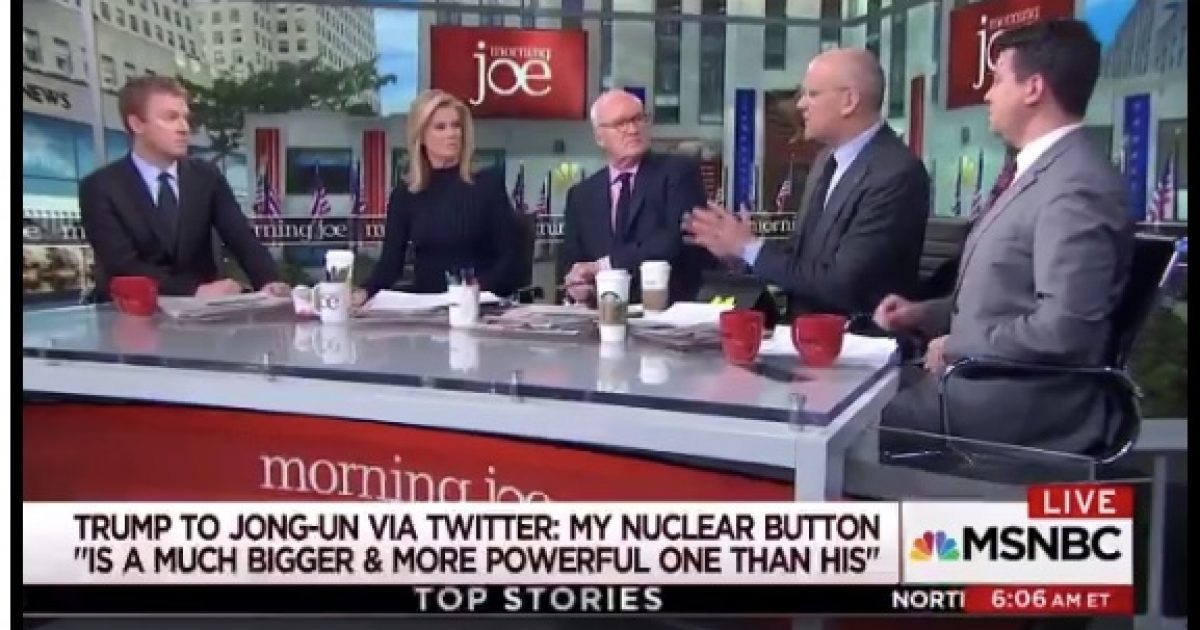 President Trump’s Tweet to North Korea about the size of the nuclear arsenal at his disposal sent the panelists on MSNBC’s “Morning Joe,” program off the rails.

North Korean Leader Kim Jong-Un issued a warning to the U.S. about his nuclear weapons capability saying, ‘The U.S. should know that the button for nuclear weapons is on my table.’

‘North Korean Leader Kim Jong-Un just stated that the ”Nuclear Button is on his desk at all times.” Will someone from his depleted and food starved regime please inform him that I too have a Nuclear Button, but it is a much bigger & more powerful one than his, and my Button works!’

The Tweet by President Trump ignited a discussion about the president including his sanity.

The set of “Morning Joe” was none too pleased by the president’s most recent Twitter fusillade taunting North Korea over the size of their respective “nuclear buttons.” On set, the regulars competed with each over who could be more outraged.

“He is not merely being cavalier with a threat about nuclear war. He’s being cavalier in a way that makes him seem demented and deranged,” said Heilemann. “Anybody who treated this cavalierly would be roundly condemned by all serious people if both parties.”

CNN joined in with comments questioning the mental stability of President Trump.

Appearing with Anderson Cooper, Stelter reacted to the president’s New Year tweets, and noted that Trump’s announcement of “THE MOST DISHONEST & CORRUPT MEDIA AWARDS OF THE YEAR” came minutes after he threatened North Korea with his “Nuclear Button.”

“Madness,” Stelter responded when Cooper asked him what these tweets meant for the New Year, before arguing that at a certain point it is necessary to question the president’s fitness for office.

President Trump is not backing down to Kim Jong Un or the left-wing media.

The president announced he is going to give out, “The Most Dishonest and Corrupt Media Awards of the Year.”