It’s not new news but the big broadcast networks continue to produce overwhelmingly negative stories about President Trump and his administration.

The Media Research Center analyzed the evening broadcast news from January to April and found it was overwhelmingly negative.

The Media Research Center studied all broadcast evening news coverage of the President from January 1 through April 30, and found 90 percent of the evaluative comments about Trump were negative — precisely the same hostile tone we documented in 2017 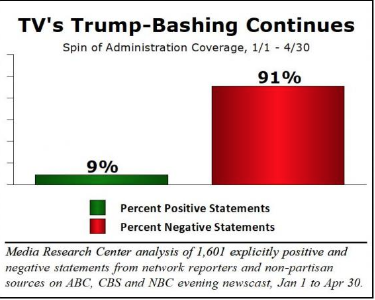 But despite the negative coverage, President Trump’s approval rating rose.

ABC, CBS and NBC’s evening news dedicated a large portion of its coverage to scandals about the president.

The 2018 findings by the Media Research Center matched the same negative news coverage in 2017.

The media is not covering news but is engaged in political advocacy.

However, the good news is President Trump’s approval rating is rising suggesting the public is filtering out the media’s anti-Trump bias.