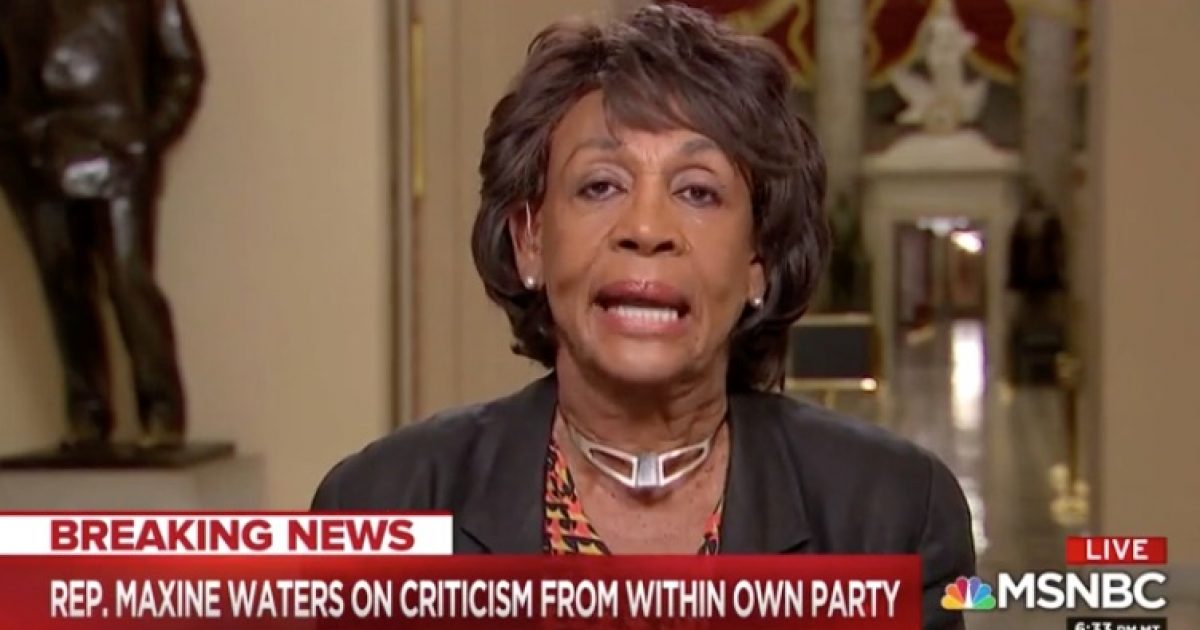 Waters spoke at a rally in California urging for the harassment of President Trump’s staff.

She continued, “History will record that while he tried to step on all of us we kicked him in his rear and we stepped on him.”

Leading Democrats were critical of Waters urging the harassment of Trump administration officials.

“I strongly disagree with those who advocate harassing folks if they don’t agree with you.”

“If you disagree with a politician, organize your fellow citizens to action and vote them out of office,” he added. “But no one should call for the harassment of political opponents. That’s not right. That’s not American.”

In the crucial months ahead, we must strive to make America beautiful again. Trump’s daily lack of civility has provoked responses that are predictable but unacceptable. As we go forward, we must conduct elections in a way that achieves unity from sea to shining sea. https://t.co/vlpqOBLK4R

In response to Waters’ calls for harassment, a Republican lawmaker introduced a censure measure and called for an apology and her resignation.

A Republican Congressman on Monday introduced an initiative to censure California Democratic Rep. Maxine Waters and ask for her resignation after she encouraged others to confront Trump administration officials.

Rep. Andy Biggs, R-AZ., introduced a measure calling on the congresswoman to apologize to the White House for “endangering their lives and sowing seeds of discord,” resign from her position, and release a public statement saying harassment or violence isn’t a form of protest.

Tonight, I introduced a resolution to censure and condemn Maxine Waters for her recent comments, that encouraged actions that jeopardized the safety of government officials. Her rhetoric, as a Member of Congress, was unacceptable. STATEMENT: https://t.co/9GbZZyFk5p

Waters defended her remarks saying, “I did not call for harm for anybody. The president lied again.”

Waters has since doubled-down on her comments at a rally, insisting that she didn’t suggest harming people. “Trump is the one who is creating lies,” Waters said during a Monday afternoon news conference. “Trying to have people believe that I talked about harming people. There’s nowhere in my statement, anytime, anyplace that we talked about harm.”

“I have nothing to do with the way people decide to protest. Protest is the democratic way as long as it is peaceful,” Waters added. “I believe in peaceful protest. It is guaranteed to you in a democracy.”

Representative Waters’ calls for the harassment of Trump administration officials is dangerous and she should be held accountable for inciting those who disagree with the administration.