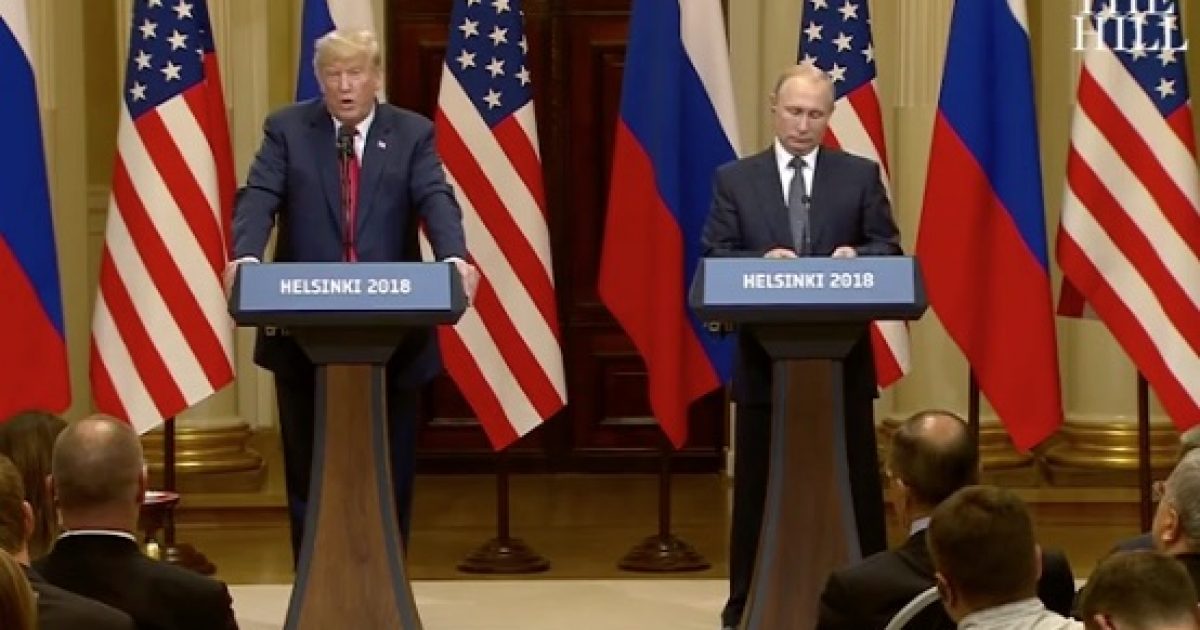 The anti-Trump mob is going wild over comments made by President Trump in a press briefing with Russian President Vladimir Putin.

During the press briefing, President Trump refused to attack Putin over Russia’s effort to interfere in the 2016 presidential election as outlined in a recent Department of Justice indictment of 12 Russian intelligence officers.

Donald Trump’s press conference performance in Helsinki rises to & exceeds the threshold of “high crimes & misdemeanors.” It was nothing short of treasonous. Not only were Trump’s comments imbecilic, he is wholly in the pocket of Putin. Republican Patriots: Where are you???

“Well, Brian, I thought that there was nothing Donald Trump could say that would shock me, but I was wrong. I was just totally shocked at the performance of Donald Trump in Helsinki at a press conference with Vladimir Putin. I just found that it was outrageous. And even when the press — and thank goodness the press asked the right questions — even when the press gave him an opportunity to hold Russia accountable for anything, he chose to talk about Hillary Clinton, about his election, about servers. He criticized American citizens, Secretary Clinton and others as opposed to really taking advantage of a world stage, with all the world’s eyes upon them, to point out how unacceptable Russia’s behavior and interference in our election and the elections of other democratic countries around the globe is. But he just shirked those responsibilities. I cannot understand how the national security team can continue to abide by this and how Pompeo and Bolton and Kelly can continue in their jobs. This, I think, rises to the point of good American patriots resigning in objection to that performance by Donald Trump. I’m at a loss of words to describe just how outrageous his words, his statements, his behavior has been. And one can only conclude that he fears Vladimir Putin. And that one-on-one discussion, who knows what was discussed there. And how Mr. Putin now is the master puppeteer of Donald Trump, the person who is in our Oval Office. Outrageous.”

GOP Sen. Bob Corker says he’s disappointed with US President Trump’s comments at the summit with the Russian president: “I felt like the President’s comments made us look as a nation more like a pushover” https://t.co/Alzf0zzEGF

Today’s press conference in #Helsinki was one of the most disgraceful performances by an American president in memory.

It would have been very easy to criticize Putin on the world stage to please the media and political elite but that would only make U.S. and Russian relations worse.

What we know is President Trump did not take the bait from the media at the press briefing to slam Putin.

We also know President Trump is advancing an America First agenda and today’s press briefing needs to be understood in the greater context.

It’s a mistake to overreact to one press briefing.