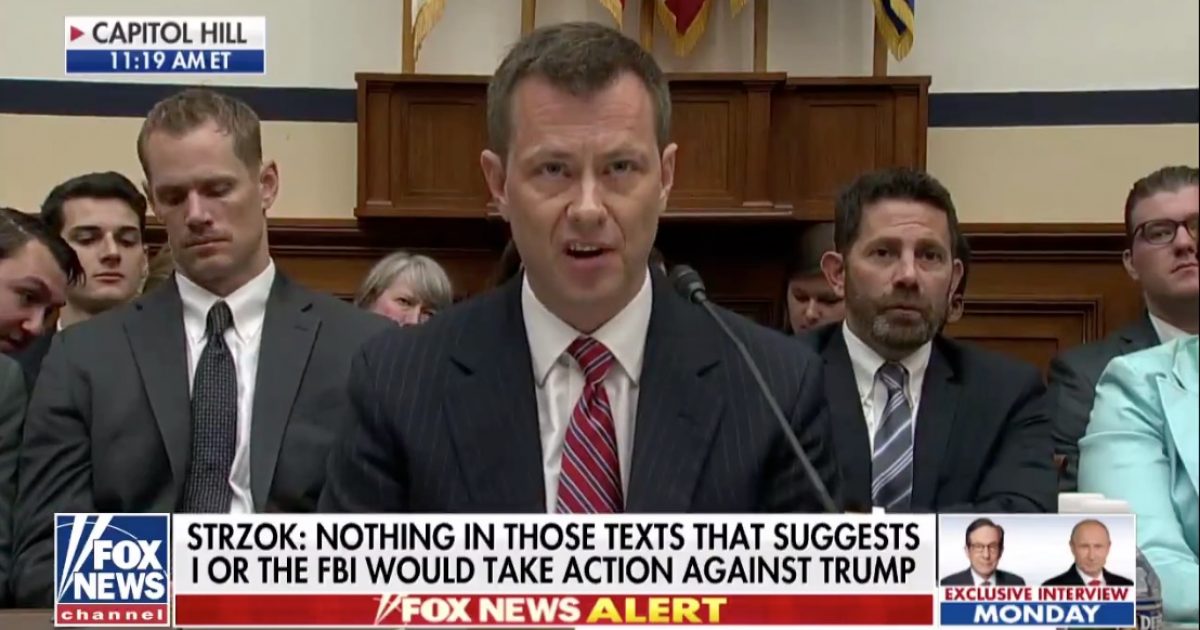 FBI agent Peter Strzok testified in Congress today about his role in investigating the Hillary Clinton email scandal and whether then-candidate Donald Trump’s campaign colluded with Russia to help get him elected president.

The hearing exposed the deep political divide surrounding Strzok and the FBI.

Republicans aggressively challenged Strzok over his text messages that showed a deep personal bias against President Trump but the agent denied his views did not impact the investigations he led.

Democrats were supporting Strzok and at one point cheered one of his statements.

Peter Strzok testified publicly for the first time since being removed from special counsel Robert Mueller’s team, telling lawmakers that texts he traded with an FBI lawyer in the run-up to the 2016 presidential election reflected personal views that he never once acted on.

“At no time, in any of those texts, did those personal beliefs ever enter into the realm of any action I took,” Strzok said.

He insisted under aggressive questioning that an August 2016 text in which he said “We’ll stop” a Trump presidency followed Trump’s denigration of the family of a dead U.S. service member. He said it was his personal view, written late at night and off-the-cuff, of “horrible, disgusting behavior” by the Republican presidential candidate.

Fox News posted a Tweet with Strzok aggressive defense of his role at the FBI:

Peter Strzok: "'We will stop it.' You need to understand that that was written late at night off the cuff and it was in response to a series of events that included then-candidate Trump insulting the immigrant family of a fallen war hero." pic.twitter.com/sF9fSDaKDt

A Tweet from Nick Short captured the Democrats cheering Strzok:

Democrats give disgraced FBI agent Peter Strzok a round of applause after his little speech defending his actions. The self-righteous smugness of it all is just astounding. pic.twitter.com/tleEif0dwp

Strzok’s claim that his personal beliefs didn’t affect the FBI investigations he led is not credible but Democrats overwhelming support of the FBI agent shows they are putting politics before truth.