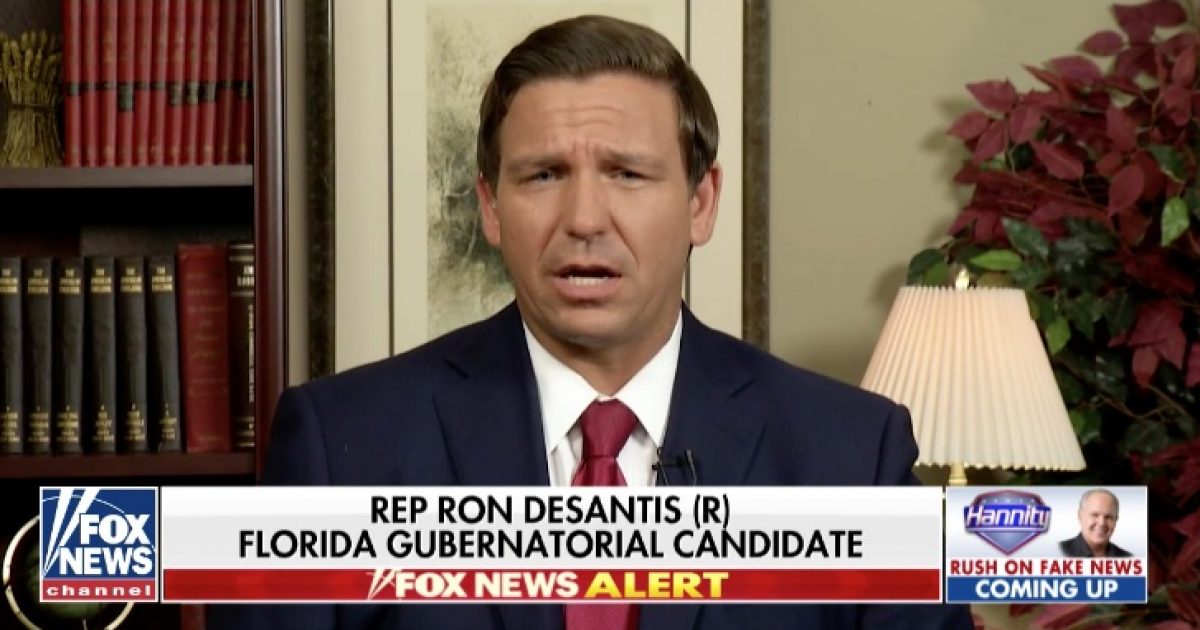 The Left seized on a comment made by a Trump-backed candidate for the governor race in Florida to damage his reputation.

This week, Florida Republican Representative Ron DeSantis won the gubernatorial primary and commented about his win on Fox News.

During the interview, DeSantis used the phrase “monkey it up” and the Left jumped on the opportunity to claim he was speaking about his Democrat political opponent who happens to be black.

“The last thing we need to do is to monkey this up by trying to embrace a socialist agenda with huge tax increases and bankrupting the state,” DeSantis said. “That is not going to work. That’s not going to be good for Florida.”

“A little while ago, we had Ron DeSantis, the Republican nominee for governor in Florida on for an interview to discuss the Florida election,” Fox News’ Sandra Smith said Wednesday. “During the interview, he made what some are calling an inappropriate comment about his Democratic opponent, Andrew Gillum.”

Smith also read a statement from a DeSantis spokesperson and commented for the network:

“Ron DeSantis was obviously talking about Florida not making the wrong decision to embrace the socialist policies that Andrew Gillum espouses,” the statement read. “To characterize it as anything else is absurd. Florida’s economy has been on the move for the last eight years, and the last thing we need is a far-left democrat trying to stop our success.”

“We do not condone this language and wanted to make our viewers aware that he has since clarified his statement,” Smith said afterwards.

Media outlets doubled down on DeSantis’ comments as racist.

The Hill Tweeted and put words in DeSantis’ mouth.

DeSantis: "The last thing we need to do is to monkey this up by trying to embrace a socialist agenda with huge tax increases and bankrupting the state. That is not gonna work. That’s not gonna be good for Florida."

This phrase is nothing new and has nothing to do about racism.

From Americans for Tax Reform:

Gillum’s tax hike to 7.75% will give Florida the highest corporate tax rate in the region — higher than Georgia, South Carolina, North Carolina, Tennessee, Alabama, and Mississippi.

There is a double-standard when it comes to what Republicans say versus Democrats.

Then-Senator Obama said similar words while addressing a crowd during the 2008 presidential campaign.

Barack Obama warned supporters that politicians had “monkeyed around” with elections, during a campaign speech at Kent State University in New Philadelphia, Ohio, on September 3, 2008.

“I come from Chicago. It’s not as if it’s just Republicans who have monkeyed around with elections in the past. Sometimes Democrats have, too. You know, whenever people are in power, they have this tendency to try to tilt things in their direction.”

Where was the outrage over Obama’s comments?

Liberals will seize upon anything to play the race card when it fits their agenda.