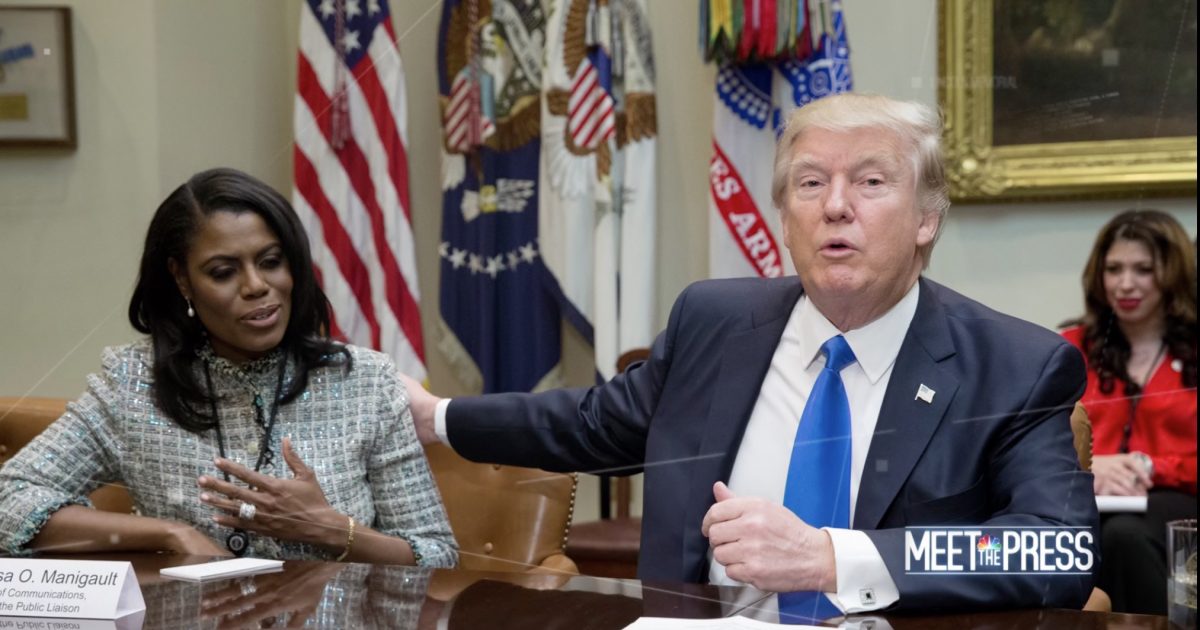 Former White House director of communications for the Office of Public Liaison Omarosa Manigault-Newman’s book, “Unhinged: An Insider Account of the Trump White House,” is out this week.

Since leaving the White House, Omarosa has become a huge critic of President Trump with her latest claim calling the president a “racist.”

On “Meet the Press,” Omarosa said she recently heard an audio tape where she claims President Trump used the N-word.

Manigault writes in her book that she heard people describe the tape, but claimed to Todd that since writing it she actually “heard his voice as clear as you and I are sitting here” saying it.

“Once I heard it for myself, it was confirmed what I feared the most: that Donald Trump is a con and has been masquerading as someone who is actually open to engaging with diverse communities,” she continued, saying the tape confirms he is “truly a racist.”

Omarosa blasting President Trump is a new twist to their relationship. Previously, she supported the president and attributed her success to him.

Here are her comments published by The Hollywood Reporter:

As far as race, I can only talk of my own experiences as an African-American working with Donald, Ivanka, Eric, Donald Jr. and Melania on The Apprentice franchise. I’ve always felt incredibly appreciated and celebrated by the organization. You have to look at my track record with the Trumps. People show you who they are by what they do, and in my case, he’s only invested in and empowered me. He’s been very public about how he feels, that I contributed to The Apprentice franchise and how I was his favorite contestant — contrary to what people say and believe about him when it comes to African-American women. Truly, I am living the American dream because of Donald Trump. Look at my career, the wealth and exposure that I’ve had: It’s very difficult to make the argument that Donald Trump doesn’t like black people and black women.

It’s clear Omarosa’s sudden conversion to the anti-Trump view has everything to do with promoting her book.