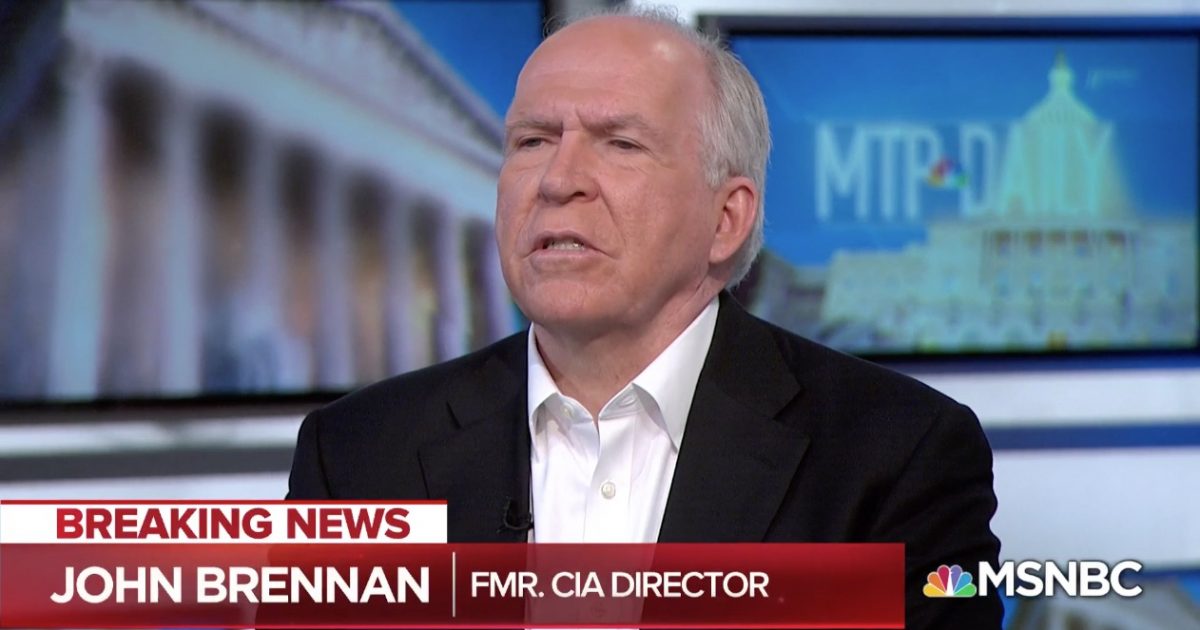 As the head of the executive branch and Commander in Chief, I have a unique, Constitutional responsibility to protect the Nation’s classified information, including by controlling access to it. Today, in fulfilling that responsibility, I have decided to revoke the security clearance of John Brennan, former Director of the Central Intelligence Agency (CIA).

Historically, former heads of intelligence and law enforcement agencies have been allowed to retain access to classified information after their Government service so that they can consult with their successors regarding matters about which they may have special insights and as a professional courtesy.

Neither of these justifications supports Mr. Brennan’s continued access to classified information. First, at this point in my Administration, any benefits that senior officials might glean from consultations with Mr. Brennan are now outweighed by the risks posed by his erratic conduct and behavior. Second, that conduct and behavior has tested and far exceeded the limits of any professional courtesy that may have been due to him.

Brennan has a track record of attacking President Trump.

When the full extent of your venality, moral turpitude, and political corruption becomes known, you will take your rightful place as a disgraced demagogue in the dustbin of history. You may scapegoat Andy McCabe, but you will not destroy America…America will triumph over you. https://t.co/uKppoDbduj

Brennan vowed on Twitter, “I will not relent,” following President Trump’s announcement to revoke his security clearance.

This action is part of a broader effort by Mr. Trump to suppress freedom of speech & punish critics. It should gravely worry all Americans, including intelligence professionals, about the cost of speaking out. My principles are worth far more than clearances. I will not relent. https://t.co/TNzOxhP9ux

More broadly, the issue of Mr. Brennan’s security clearance raises larger questions about the practice of former officials maintaining access to our Nation’s most sensitive secrets long after their time in Government has ended. Such access is particularly inappropriate when former officials have transitioned into highly partisan positions and seek to use real or perceived access to sensitive information to validate their political attacks. Any access granted to our Nation’s secrets should be in furtherance of national, not personal, interests. For this reason, I have also begun to review the more general question of the access to classified information by former Government officials.

As part of this review, I am evaluating action with respect to the following individuals: James Clapper, James Comey, Michael Hayden, Sally Yates, Susan Rice, Andrew McCabe, Peter Strzok, Lisa Page, and Bruce Ohr. Security clearances for those who still have them may be revoked, and those who have already their lost their security clearance may not be able to have it reinstated.

Nothing good will come from those who despise President Trump and his administration.