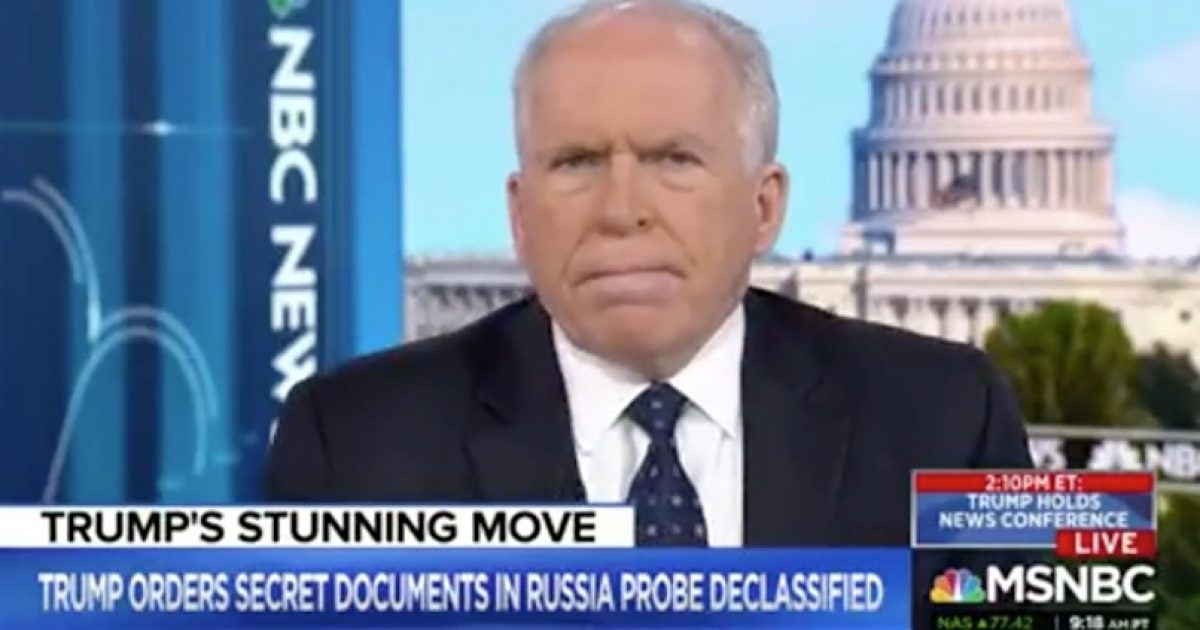 Brennan urged employees in the intelligence community to resist President Trump’s immediate declassification order of FBI documents over collusion between the Trump campaign and Russia.

Appearing on MSNBC on Tuesday, Brennan urged people in the intelligence community to ignore the president’s order. The former CIA head was stripped of his security clearance by Trump in August for his bizarre behavior.

“A number of individuals are trying to protect Mr. Trump and abusing their authorities and their powers, whether it be in Congress or within the executive branch,” Brennan said.

“And this is something that I am hoping that individuals of conscience are going to stop and prevent because I am concerned that this is just one indication that Mr. Trump is going to increasingly look for steps to take in order to further try to subvert the Mueller investigation,” Brennan continued.

Brennan called out the leaders in the intelligence community to “push back” on orders from the White House to shield the Mueller investigation from potential “negative impact.”

Former CIA director and MSNBC contributor John Brennan called on FBI director Christopher Wray, Director of National Intelligence Dan Coats, and Deputy Attorney General Rod Rosenstein to “push back” on any directive from the White House that may have a “negative impact” on the Mueller investigation.

Brennan called on “individuals of conscience” in the administration to remember that they took an oath of office not an oath to Donald Trump. Moments prior Brennan admonished people who are abusing their powers to “protect” Trump.

“I think that they should continue to push, push, push, and if Mr. Tump and the White House does not relent, then they have some decisions to make, and whether or not they are going to the just not follow that direction and be fired or to resign,” Brennan said of the trio.

White House Press Secretary Sarah Huckabee Sanders said the decision to declassify the documents is “at the request of a number of committees of Congress, and for reasons of transparency.”

There was a time the Left was for transparency before they were against it.

The Left is pulling out all the stops to keep the deep state agenda to slam President Trump hidden from the public.