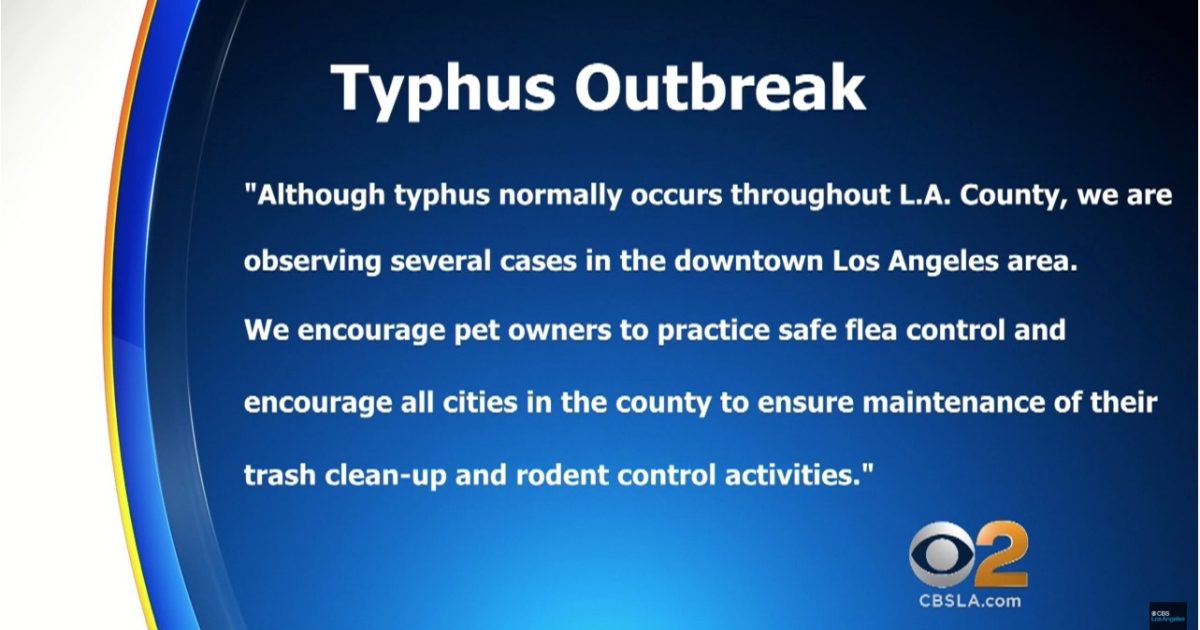 Los Angeles is experiencing another outbreak of typhus.

New cases of the flea-borne disease were reported in Willowbrook and the Los Angeles region is seeing a rise in the disease over the past ten years.

Typhus outbreaks are often associated with poor hygiene and overcrowding. More people have been falling sick with typhus in Los Angeles County over the last decade, though experts are unsure why.

The latest cases bring the county total to at least 83 this year. There were five in all of 2008, according to the California Department of Public Health.

“We expect to continue to see clusters of flea-borne typhus throughout L.A. County,” health officials wrote in an alert to doctors on Friday.

CNN also reported on the cases of typhus in Los Angeles County.

A rise in typhus, a bacterial disease spread by lice or fleas, has hit the Los Angeles area, and public health officials are sounding the alarm.

As of Monday, there have been 57 cases of flea-borne typhus in Los Angeles County, the county Department of Public Health said.

LOS ANGELES – The Los Angeles County Department of Public Health (Public Health) is investigating an outbreak involving several cases of flea-borne typhus in downtown Los Angeles and is working with the city of Los Angeles to implement environmental safety measures to reduce the spread of the disease.

Flea-borne typhus is a disease that infected fleas can spread to humans. Bacteria (Rickettsia typhi and R. felis) found in infected fleas, and their feces, cause typhus. Fleas can come from many types of animals including cats, rats, and opossums. Although pets and animals do not get sick from typhus, typhus can cause high fever, chills, headache, and rash in people and can be treated with antibiotics. Places where there is an accumulation of trash that attract wild animals like feral cats, rats and opossums that may carry an infected flea may increase the risk of exposure. Typhus is not transmitted person-by-person.

Practice safe flea control
Use flea control products on your pets.
When outside, wear pants tucked into socks or boots. Spray insect repellent with DEET on socks and pant cuffs.
Avoid being near wild or stray animals
Never feed or touch wild animals, especially opossums, rats, stray, or feral cats.
Store your trash in cans with secure lids to avoid attracting animals.
Get rid of places where rats and stray animals sleep, hide, or find food, like crawl spaces, attics, or under decks. Protect yourself by wearing gloves and a mask when cleaning these areas. Wash your hands when you’re finished.
Public Health is partnering with the City of Los Angeles and community partners to continue surveillance activities, to interview and treat those affected and to reduce the environmental risk for this disease. For rodent complaints in the City of Los Angeles, call 3-1-1. For other cities, call LA County 2-1-1.

It’s possible the rise of typhus in Los Angeles County is associated with the homeless problem in the area.