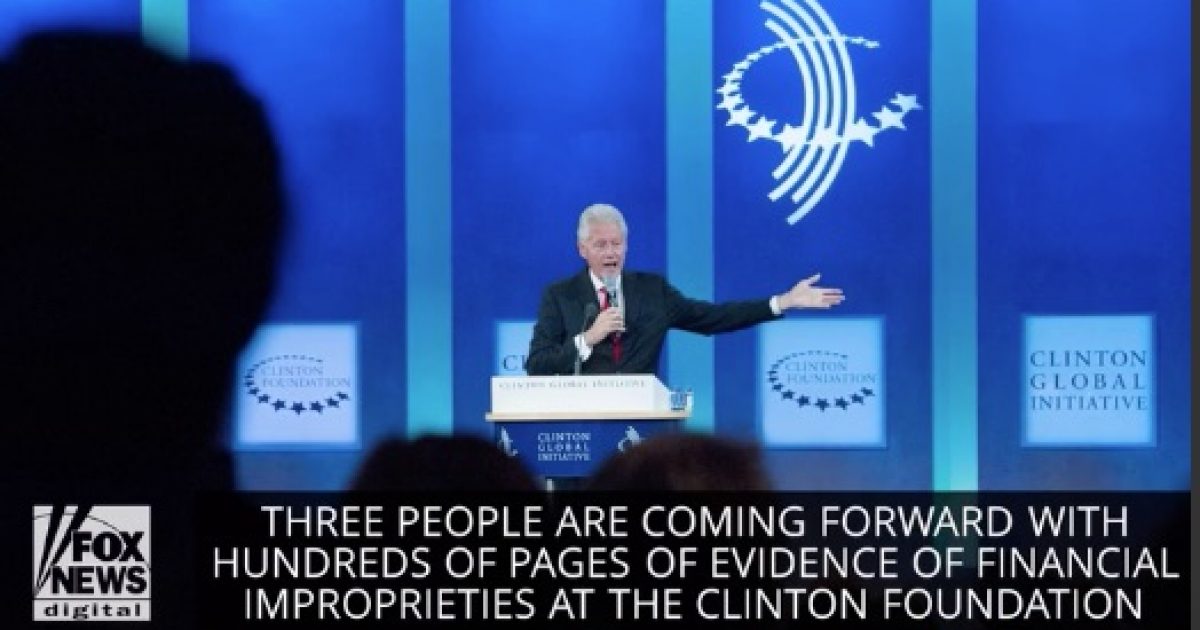 The Clinton Foundation is facing a threat from whistleblowers.

North Carolina Republican Representative Mark Meadows is holding a hearing to investigate documents provided by whistleblowers about the activities of the Clinton Foundation.

Three people have come forward with hundreds of pages of evidence of potential wrongdoing by the Clinton Foundation, including misappropriation of funds and allegations of quid-pro-quo promises made to donors during Hillary Clinton’s tenure as secretary of state, Rep. Mark Meadows, R-N.C., told Fox News on Thursday.

According to news reports, Huber is working with MDA Analytics LLC, a company that specializes in criminal investigations and the firm provided evidence to government officials.

That evidence was assembled by a private firm called MDA Analytics LLC, run by accomplished ex-federal criminal investigators, who alleged the Clinton Foundation engaged in illegal activities and may be liable for millions of dollars in delinquent taxes and penalties.

In addition to the IRS, the firm’s partners have had contact with prosecutors in the main Justice Department in Washington and FBI agents in Little Rock, Ark. And last week, a federal prosecutor suddenly asked for documents from their private investigation.

One area of focus is the possibility former President Bill Clinton used foundation money for personal use. Andrew Kessel, the CFO of the Clinton Foundation, was interviewed by MDA Analytics regarding those allegations.

One of the nonpublic documents is an interview memo the MDA Analytics investigators penned after meeting with Kessel in late November 2016 at the Princeton Club in New York City.

Kessel told those investigators that “one of the biggest problems was Mr. Clinton’s commingling and use of business and donated funds and his personal expenses,” according to the whistleblower submission.

“There is no controlling Bill Clinton. He does whatever he wants and runs up incredible expenses with foundation funds,” states a separate interview memo attached to the submission.

“Bill Clinton mixes and matches his personal business with that of the foundation. Many people within the foundation have tried to caution him about this but he does not listen, and there really is no talking to him,” the memo added.

In 2016, CNN reported on the charitable ranking of the Clinton Foundation by CharityWatch:

“The #ClintonFoundation ranks about as high as you can get for a charity.” Watch @CNN interview CharityWatch President Daniel Borochoff. pic.twitter.com/s8J8jsWLSB

Hopefully, the hearing in Congress and the DOJ investigation will shed light on the possible illegal activities by the Clinton Foundation.