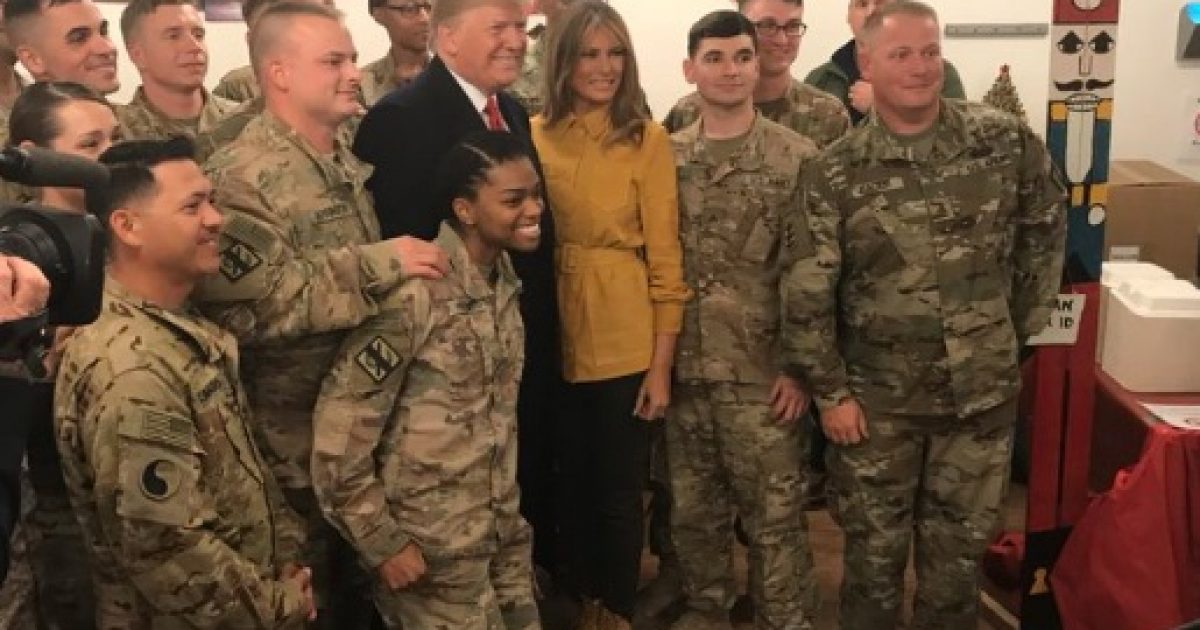 President Trump and First Lady Melania made a surprise trip to visit U.S. troops in Iraq that shocked the media.

Prior to the trip, news outlets were criticizing the president for not making a holiday visit to see troops stationed overseas.

On Christmas Day, President Donald Trump took part in a long-running practice of presidents who called troops stationed around the country and the world.

But he broke from a recent tradition of actually visiting troops and wounded warriors. He did so in 2017, when he visited wounded troops at Walter Reed National Military Medical Center on Dec. 21 (and invited Coast Guard service members to play golf at his course in West Palm Beach, Florida).

By staying home on Tuesday, Trump became the first president since 2002 who didn’t visit military personnel around Christmastime.

Ooops! NBC News got caught by surprise when news broke of President Trump and Melania’s surprise visit to Iraq.

NBC News updated the initial story with a correction.

Editor’s note: On Wednesday, a day after this article was published, President Trump made a surprise visit to Iraq to greet U.S. troops. It was his first presidential visit to a combat zone.

NBC News was not the only news organization critical of the president.

The military in Iraq warmly greeted the president and First Lady.

Powerful moment – Member of United States Army told the President he came back into the military because of him. And President Trump responded, “And I am here because of you.” I met him after and he gave me the patch from his arm. Incredible. #TrumpTroopsVisit pic.twitter.com/WmQf3b2K8X

President Trump and the First Lady traveled to Iraq late on Christmas night to visit with our troops and Senior Military leadership to thank them for their service, their success, and their sacrifice and to wish them a Merry Christmas. pic.twitter.com/s2hntnRwpw

Despite the visit, some in the media still found a way to slam President Trump.

CNN political analyst and former Obama national security veteran Sam Vinograd slammed President Trump on Wednesday for appearing to have “confused” his unannounced visit with troops in Iraq “with a campaign rally.”

“Well, Jim, he can certainly check the box that he physically made it to Iraq, but what he actually did on the ground while he was there is just as important,” Vinograd, who served as the Director of Iraq in former President Obama’s National Security Council, told CNN’s Jim Acosta

President Trump’s visit exposed the anti-Trump bias of the media – whatever he does or says is wrong.