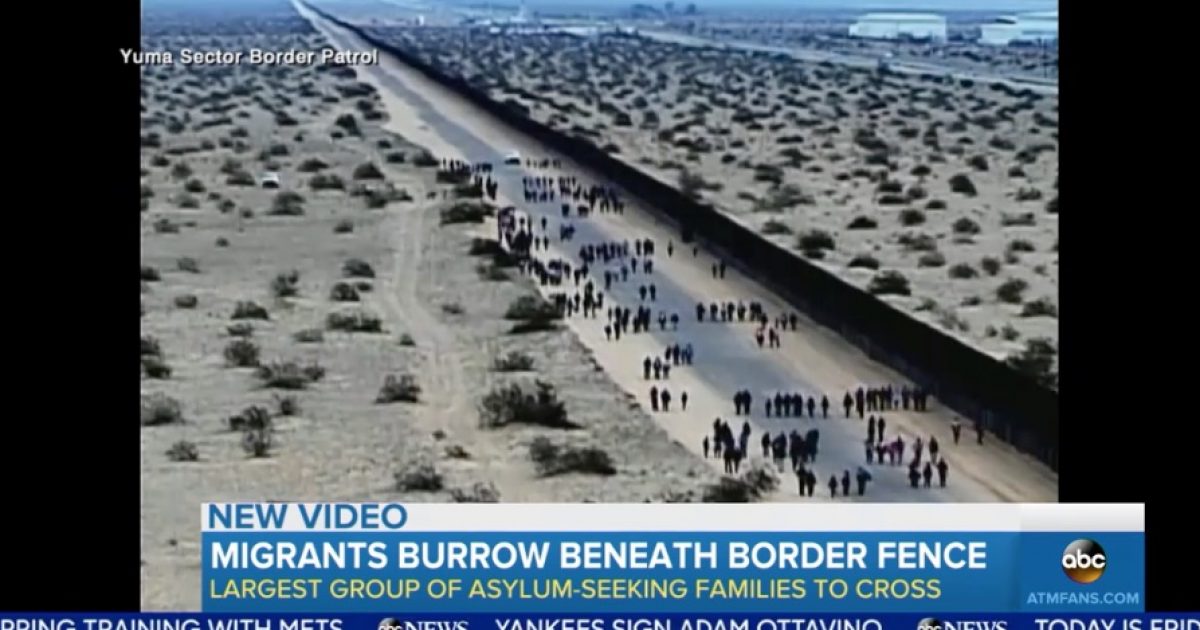 Border patrol agents captured what is called the “largest single group of asylum seekers,” after tunneling under a border fence in Arizona.

A total of 376 people were arrested by border patrol agents.

The largest single group of asylum seekers ever to cross into the U.S. tunneled beneath the border wall near San Luis, Arizona, on Monday, voluntarily turning themselves into Customs and Border Protection, according to the agency.

Migrants can be seen marching toward Border Patrol agents by the hundreds, according to video obtained by ABC News. Smugglers dug a series of seven holes, only a few feet long beneath the steel border fence, with hundreds going beneath the wall and a smaller number clambering over it, according to CBP.

Those seeking to use the story to undermine President Trump’s effort to build a wall need to address this paragraph:

The mass crossing this week took place in a sparsely populated stretch of the border — where an old model of border barrier rises about 12 feet from the sandy ground. The stretched agency only had three agents patrolling that 26-mile-long section of the border.

It took hours to process the families, most of which were sent to the area’s chronically overcrowded central processing center in Yuma.

“In my 30 years with the Border Patrol, I have not been part of arresting a group of 376 people,” Porvaznik said. “That’s really unheard of.”

Note the description of the fence as “an old model” and only three agents to cover a quarter mile area.

Also, Border Patrol agents seized a significant amount of cocaine in an area that does not have a barrier.

Border Patrol agents said they confiscated more than 700 lbs. of cocaine on Thursday just miles from the Rio Grande river.

I’m in the area with an appointment for a ride-along with border patrol agents, who say that this particular portion of the border is especially high in illegal crossing, including by drug smugglers, due to a lack of physical infrastructure to act as a barrier on the border.

Customs and Border Protection said the suspects were seen loading “bundles of narcotics” into an off-road-style utility vehicle outside of Garciasville, a city in Texas up against the river. The suspects, apparently aware they had been seen, were able to “abruptly” drive the vehicle into the river and escape into Mexico, CBP said.

The wall is a necessary part of the effort to reduce the flow of illegals – the wall coupled with more agents and technology is necessary to stop the invasion.