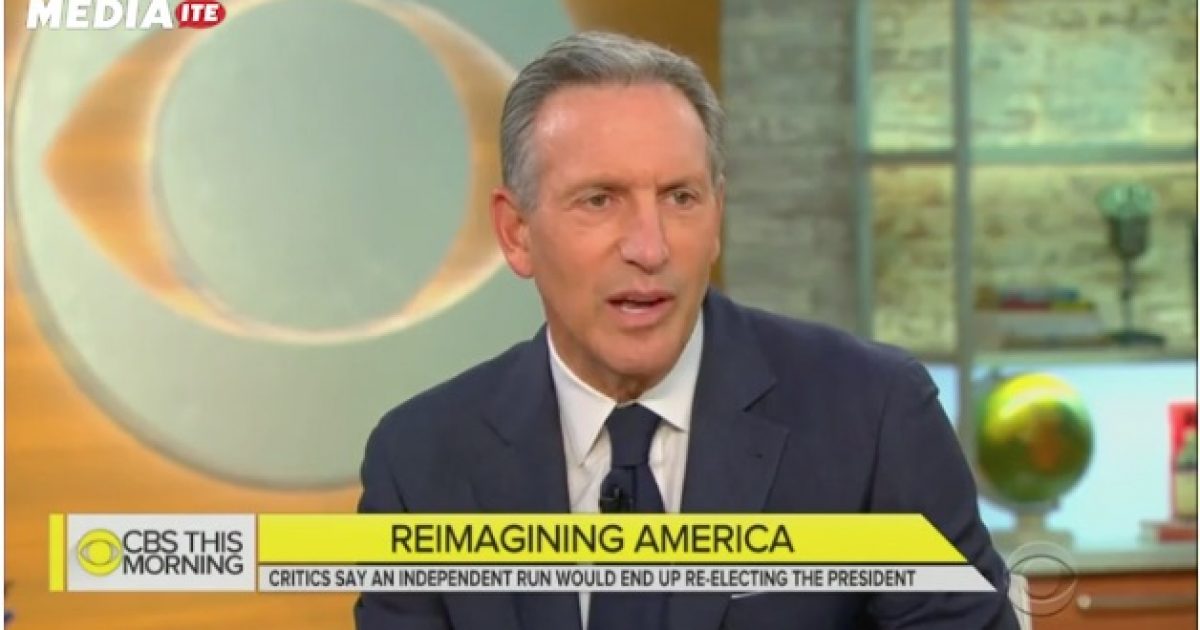 Howard Schultz, the former CEO of Starbucks, is considering running for president as an Independent and Democrats are blasting the idea.

The reaction to Howard Schultz’s announcement that he’s “strongly” considering an independent presidential run has been swift and loud. Democrats and other critics of President Trump are urging the former Starbucks chairman and CEO to reconsider his potential plans for 2020.

Despite the criticism he’s faced over the past 48 hours since that announcement, Schultz said he believes he can “beat the system” if he does choose to run in 2020 and rejected the idea that it would risk the re-election of President Trump.

“I must be doing something right to garner this much attention and this much interest,” Schultz told “CBS This Morning” on Tuesday.

Democrats worry an Independent candidate will split the anti-Trump vote resulting in a 2020 victory for President Trump.

Billionaire Michael Bloomberg fired a warning shot in the direction of former Starbucks CEO Howard Schultz on Monday, saying he shouldn’t mount an independent campaign for president because he could prevent the Democratic Party from defeating President Donald Trump in 2020.

Third-party White House runs tend to peel votes away from major-party candidates, splitting the support from one side in a way that benefits the other.

Schultz is a progressive but as a businessman, he worries about over taxation, the national debt and the cost of Medicare for all.

The former Starbucks CEO challenged the wisdom of California Democrat Senator Kamala Harris’ plan to offer Medicare for all.

Host Norah O’Donnell challenged previous comments that Schultz made on 60 Minutes in which Schultz ostensibly compared Democrat’s proposal for universal health care to a border wall.

Schultz recalled a clip previously aired of Senator Harris supporting Medicare for all by saying “she wants to abolish the insurance industry.”

“That’s not correct. That’s not American,” Schultz claimed, adding “What’s next? What industry are we going to abolish next? The coffee industry?”

With voters upset over the traditional political parties, there is a lot of room for a candidate to run as an Independent and that’s why Democrats are slamming Schultz.

Moment of the Week: "I am not … in bed with a party," says former Starbucks CEO Howard Schultz, who is considering running for president as a "centrist independent." https://t.co/El3j3l8z7G