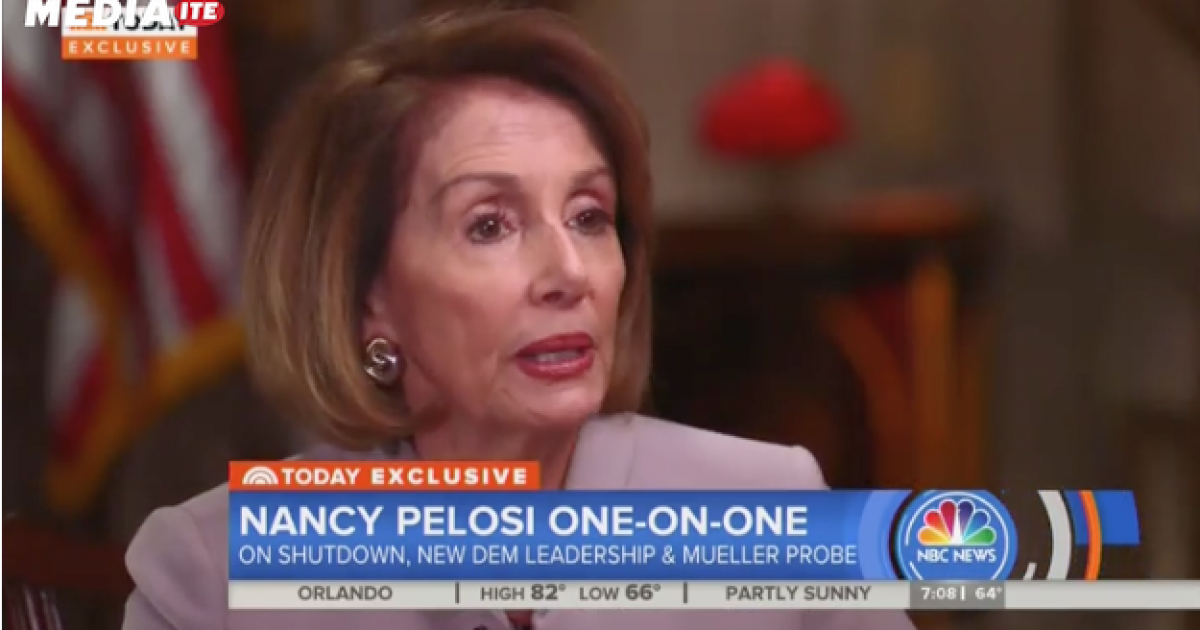 Soon to be Speaker of the House Nancy Pelosi (D-CA) feels President Trump could be indicted while serving as president.

NBC’s “Today” co-host Savannah Guthrie asked Pelosi if Special Counsel Robert Mueller should ignore the Department of Justice guidance that protects the president from an indictment.

Pelosi said the guidance is not “conclusive.”

Guthrie asked Pelosi if she believes Special Counsel Robert Meller should “honor and observe the Department of Justice guidance that states a sitting president cannot be indicted?”

Pelosi replied that she did not think the guidelines to be definitive, saying “I do not think that that is conclusive. No, I do not.”

Guthrie followed up by asking “So you think it’s possible that Special Counsel Mueller could legally indict a sitting president?”

After hedging a bit on waiting to see what “Mueller does,” Pelosi resolved with “It’s not the law. Everything indicates that a president can be indicted after he is no longer president of the United States.”

Pelosi is gearing up to challenge President Trump.

Nancy Pelosi, who is expected to take the gavel as House speaker Thursday, told USA TODAY in an exclusive interview that President Donald Trump can expect a “different world” from the first two years of his presidency when the GOP controlled both chambers of Congress.

For the past two years, members of Pelosi’s team have held weekly strategy meetings with top policy and communications staffers from several committees with oversight powers. They have focused on exposing scandals among administration officials who have since left their positions, allegations of Trump’s conflicts of interests, the handling of security clearances and aspects of the Russia investigation.

“Given the magnitude of the corruption, cronyism and incompetency in this administration, it’s definitely a war room-style effort,” said Ashley Etienne, a Pelosi spokesperson who leads communications work on oversight for Democrats.

.@realDonaldTrump has given Democrats a great opportunity to show how we will govern responsibly & quickly pass our plan to end the irresponsible #TrumpShutdown – just the first sign of things to come in our new Democratic Majority committed to working #ForThePeople. https://t.co/CGl1euCotB

Pelosi is set to be sworn in today and by all accounts, she is going to come out swinging.