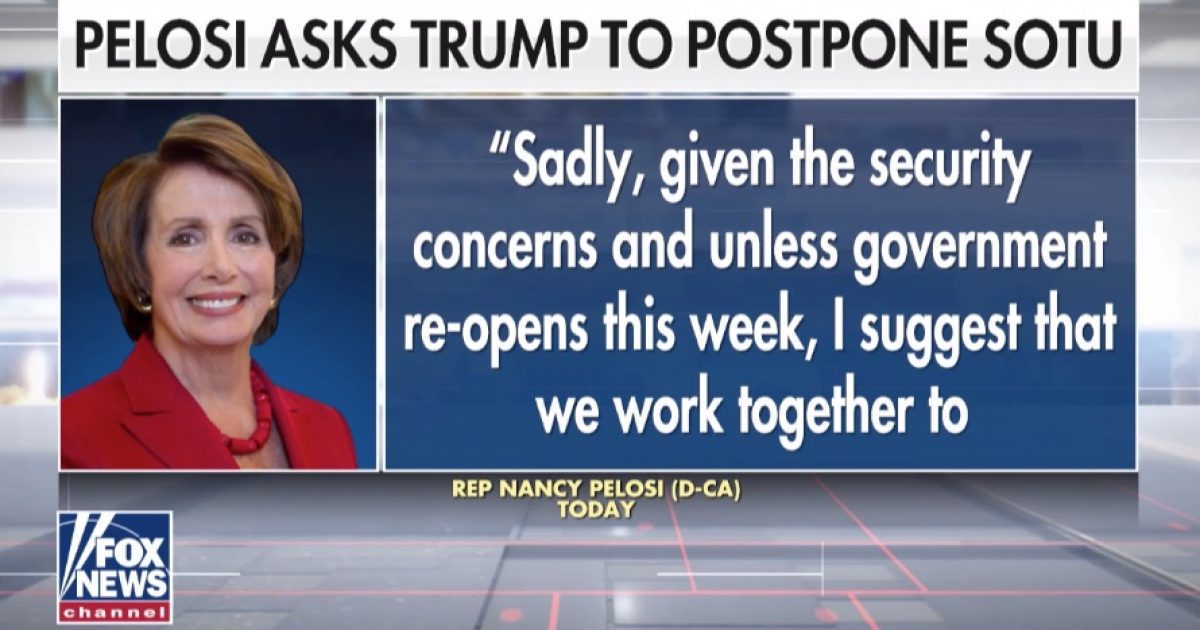 Speaker of the House Nancy Pelosi (D-CA) wants President Trump to reschedule the State of the Union address to the nation.

Pelosi wants the president’s speech delayed because of the government shutdown and she also suggested the president could submit his address in writing.

The request by Pelosi was made in a letter to President Trump and she justified her idea by citing security concerns.

Speaker Nancy Pelosi on Wednesday asked President Donald Trump to reschedule his State of the Union address — or deliver it in writing — as long as the government remains shut down.

Pelosi said the partial shutdown has hamstrung both the U.S. Secret Service and the Department of Homeland Security, potentially harming the security planning that precedes the primetime address.

“Sadly, given the security concerns and unless government re-opens this week, I suggest that we work together to determine another suitable date after government has re-opened for this address or for you to consider delivering your State of the Union address in writing to the Congress on January 29th,” Pelosi wrote in a letter to Trump.

Pelosi made her letter to President Trump available on Twitter:

Today, I wrote to @realDonaldTrump recommending that we delay the State of the Union until after government re-opens, as the @SecretService, the lead federal agency for #SOTU security, faces its 26th day without funding. https://t.co/K2oL8WGvqo pic.twitter.com/g3fIlxDbbK

The government shutdown continues without any real signs of progress as both sides fight for leverage.

This week, Trump, instead, decided not to invite Pelosi to a border security meeting at the White House, but reached out to other rank-and-file Democrats to join his lunch with Republican members of Congress. All of the Democrats invited declined the president’s invitation.

“The President offered both Democrats and Republicans the chance to meet for lunch at the White House,” White House Press Secretary Sarah Sanders said in a statement Tuesday. “Unfortunately, no Democrats will attend…It’s time for Democrats to come to the table and make a deal.”

Sanders added that Pelosi and Schumer “refuse to negotiate.”

The president has repeatedly said he is willing to “compromise,” calling that a “win” for everyone involved. But Trump continues to insist on a border wall, even threatening to declare a national emergency over the lack of funding for border security. This week, the president warned of a “big new Caravan” heading up to the Southern Border from Honduras.

Pelosi is trying to create news around the shutdown in order to blame it on President Trump.