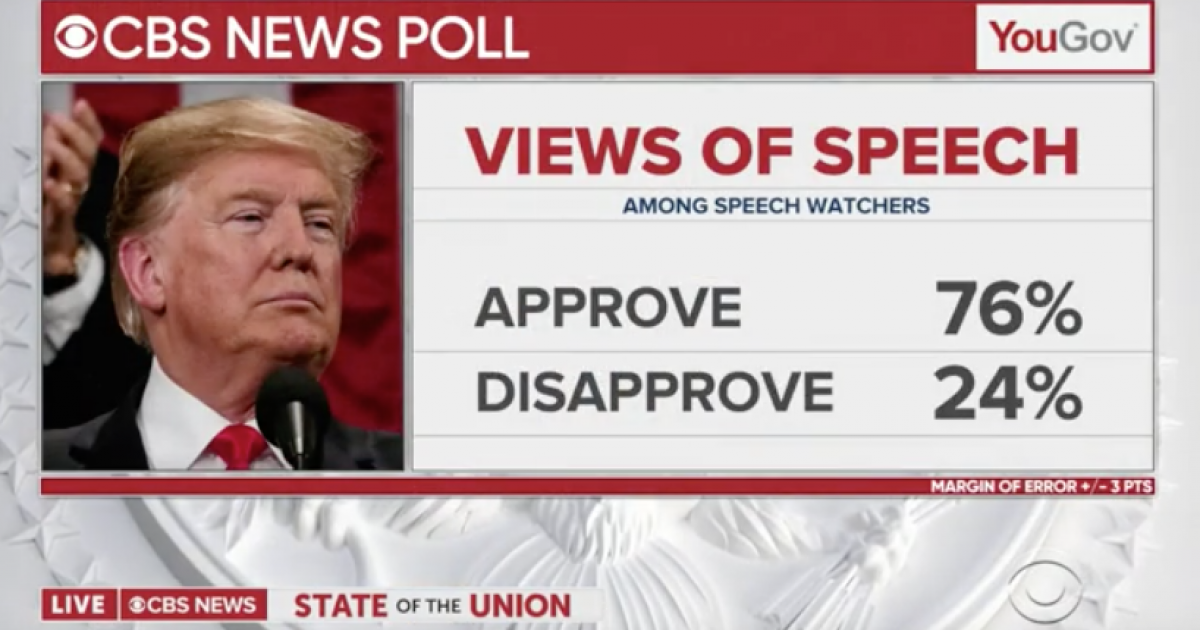 President Trump delivered a strong and solid State of the Union address garnering positive approval by a significant and meaningful percentage of Americans but the anti-Trump media disagreed.

According to a CBS poll, 76 percent approved of the speech.

Unifying America was a key theme of the president’s address.

But we must reject the politics of revenge, resistance, and retribution — and embrace the boundless potential of cooperation, compromise, and the common good.

Together, we can break decades of political stalemate. We can bridge old divisions, heal old wounds, build new coalitions, forge new solutions, and unlock the extraordinary promise of America’s future. The decision is ours to make.

President Trump highlighted the success of our nation’s economy and the dire need for strong border security.

In contrast to the theme of unity, the anti-Trump media did its best to divide Americans.

Van Jones blasted the president on a political panel on CNN.

“He tries to put together in the same speech these warm, kind things about humanitarianism and caring about children,” Jones said on CNN. “At the same time he is demonizing people who are immigrants.”

Tuesday on MSNBC’s special coverage of President Donald Trump’s State of the Union speech, network host Nicolle Wallace accused the president of having “absolutely no attachment to anything he says.”

"I think he sees himself losing on the issues": Rep. Alexandria Ocasio-Cortez responds to President Trump's #SOTU address. https://t.co/ensyKd4g5l

President Trump gave an amazing speech with a message of accomplishment and unity that was extremely well received by Americans.

The State of the Union address was so good, the anti-Trump media panicked with outrageous and detatched comments.