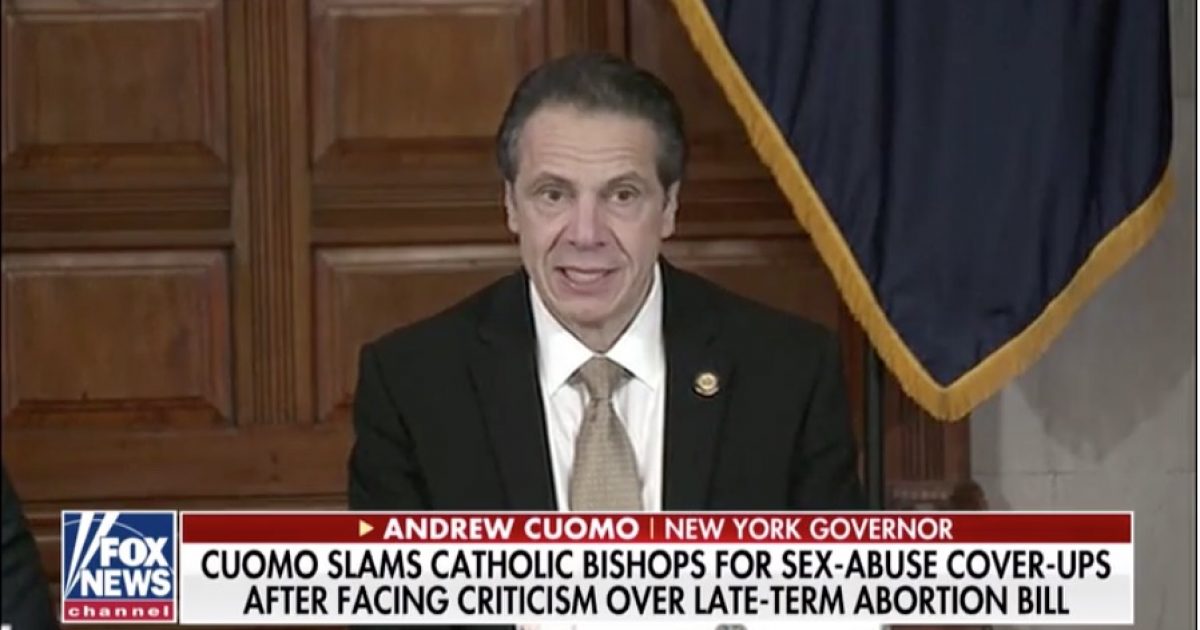 In a survey of 778 registered voters, Siena College found that Mr. Cuomo has had a precipitous eight-point drop in his favorability rating, down to 43 percent from 51 percent last month. A full 50 percent of those polled had a unfavorable opinion of Mr. Cuomo, a Democrat, up seven points from last month.

And that may have been the good news: Mr. Cuomo’s job-performance rating was even worse, with just 35 percent of those surveyed saying he was doing a “excellent” or “good” job. Almost twice that — 64 percent — said Mr. Cuomo was doing a “fair” or “poor” job, another sharp rise from January.

The story notes a Cuomo political team member cast doubt on the results of the poll.

Over the past month, Cuomo received national criticism for signing a bill that allows abortion to occur up to the time of birth and the bill gives nondoctors the right to execute the procedure.

Cuomo defended his decision from criticism from the Catholic Church.

The law allows abortions to be performed by non-doctors up until the point of birth for many reasons. Cuomo, who touts his Catholic faith and who once was an altar boy, brushed off criticism of the law on Tuesday.

The Catholic Church doesn’t believe in a woman’s right to choose. Yes, I understand their religious view,” he said. “But I’m not here to legislate religion.”

Cuomo pointed out that his father, Mario Cuomo, the late former three-term governor, received similar criticism for his support of abortion in New York.

“Bishops attacking Governor Cuomo,” he said with laughter. “Let’s pull that headline up from about 30 years ago.”

In addition to abortion, Cuomo is facing a budget challenge because the state is losing tax revenue that’s linked to residents leaving the state.

New York collected $2.3 billion less income-tax revenue than predicted for December and January, a development that Governor Andrew Cuomo blamed on wealthy residents leaving for second homes in Florida and other states that received more favorable treatment in the tax law enacted by President Donald Trump and the Republican Congress.

The shortfall will require a new look at the $175 billion budget Cuomo submitted to the legislature last month, he said. If the trend continues, the governor said it would affect spending on high-expense items such as health, education, infrastructure and a planned middle-class tax cut.

Cuomo is becoming a poster child for the failures of extreme progressive policies.